This was one of Italian football’s darkest moments, but the dark is always followed by the dawn. A new generation of Italian youngsters are making a name for themselves across the country, and even attracting attention from the biggest clubs in Europe. Italy boss Roberto Mancini has called for Serie A sides to put faith in their young academy products, as he looks to reduce the average age of his first team.

Here is a list of six young Italians for you to look out for in Serie A next season.

The Brescia midfielder is one of the hottest properties in football right now. Despite not making a single appearance in the top flight, he has already earned comparisons with the majestic Andrea Pirlo, and not only for his long flowing locks. 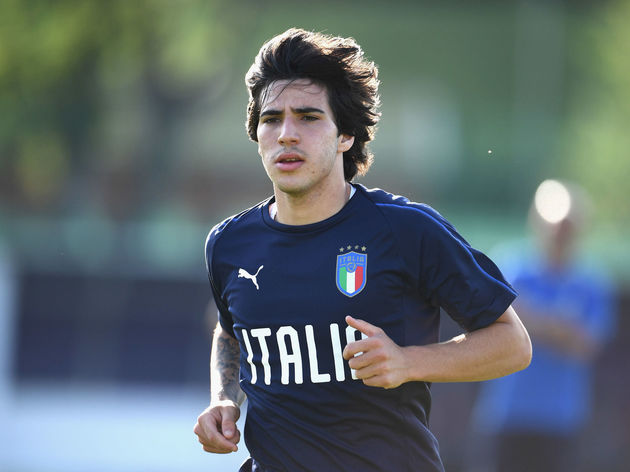 Tonali impressed all of Europe’s elite with his dominant displays for Brescia last season, as he helped them to gain promotion to Serie A, demonstrating an array of skills beyond his 19 years of age. He’s not only a pass-master with an eye that Pirlo himself would be proud of, but he has great strength in possession and can play a box-to-box role if required.

The youngster is an exciting talent who will control many Serie A midfield battles next season.

One of ?Inter’s most exciting youth products, Pinamonti is set to spend another season out on loan, this time at Genoa.

The Italy Under-21 striker was part of the Frosinone side which was was unable to escape relegation last season, but Pinamonti was a shining light in an otherwise miserable season for I Canarini. He scored five goals in a team starved of attacking prowess, and there is the feeling that given the right ammunition, Pinamonti could really thrive. Genoa survived relegation on the final day of last season, as they struggled to replace goal machine

AS Roma are in another period of transition under new manager Paulo Fonseca and the Portuguese boss is imprinting a new style upon I Giallorossi. One thing that is evident, is that he clearly sees Antonucci as a part of his plans this season. The winger has been used sparingly in the past, but his lightning speed and ability to take on his defender are invaluable traits for any team.

He is a tricky opponent for any full-back, and has impressed during each pre-season friendly he has played this summer.

The 20-year-old faces competition from the likes of Justin Kluivert and Cengiz Under, but the youngster is already a favourite with the Roma faithful, and they’re keen to see him light up the left flank of the Stadio Olimipico next season.

Bastoni is another Italy Under-21 international who caught the eye last season, following a successful loan spell at newly-promoted Parma. He helped I Crociati ease to Serie A survival, and now finds himself in the plans of Inter boss Antonio Conte. Bastoni has been a big part of Inter’s pre-season preparations, whilst Diego Godin has been rested following his Copa América commitments. His performances have been assured and confident, whilst demonstrating a real understanding and reading of the game.

Whilst he may not be a guaranteed starter for Conte, the 20-year-old could be the first-choice replacement for I Nerazzurri, and could find himself playing an important role over the course of a long season.

A Maldini, playing at ?AC Milan? You guessed it, he’s the son of Rossoneri legend Paolo Maldini and grandson of Cesare. Daniel plays as an attacker however, and he was thrown into the deep end during pre-season, making an appearance against Bayern Munich.

Maldini the third possesses great composure on the ball, and is an exciting young winger with bags of potential. Milan have already rejected bids from a number of Serie B sides who are interested in helping the youngster to develop, and the belief is that new manager Marco Giampaolo wants to keep a close eye on his progress, with a view to bringing him into the first-team fold himself.

Orsolini may be a little bit older than the other players in this list, but he showed at the end of last season that he has what’s needed to take Serie A by storm.

The 22-year-old showed great promise as a teenager, earning himself a move to ?Juventus, but left Turin without making a competitive appearance for I Bianconeri. Orsolini exploded in the second half of last season, and was an instrumental part of Bologna’s escape from relegation.

The winger scored eight goals in 35 appearances as he demonstrated the form which convinced Juve to take a chance on him as a youngster. It’s true that everyone develops at different rates, and Orsolini may finally be ready to light up Serie A.