?Some players are just born to shine on the biggest stage, and there is no greater spotlight than the Champions League final.

We have seen some outstanding team performances, but sometimes a player deserves extra credit for leading their side to glory.

Here are seven of the best individual performances in Champions League final history. The ultimate big-game player, Zinedine Zidane’s greatness was on full show in ?Real Madrid’s victory over Bayer Leverkusen in 2002.

The midfield maestro pulled the strings throughout, using his vision and creativity to push his side forward. However, for all his talent, Los Blancos could not get away from the resilient ?Bundesliga side, so Zidane took matters into his own hands.

?Roberto Carlos’ looping cross found Zidane on the edge of the area, and the Frenchman unleashed a picture-perfect volley to give his side the lead – a goal that is still considered by many as the greatest ?Champions League strike of all time. The fact that ?Liverpool legend Steven Gerrard earns a place on this list for his performance in the 2005 Champions League final, despite being destroyed by the M?ilan trio of Kaka, Gennaro Gattuso and Andrea Pirlo in the first half, should tell you how good his second-half showing truly was.

Milan had stormed to a 3-0 lead by half-time, so manager Rafa Benitez opted to push Gerrard further up the field and introduce Dietmar Hamann ?to the fold, and it proved to be the catalyst for greatness. His header kick-started the comeback, and he won the penalty to bring his side level.

Gerrard even finished the game at right-back to help counter the energy of Serginho, and was deservedly named Man of the Match in one of the greatest finals in history. 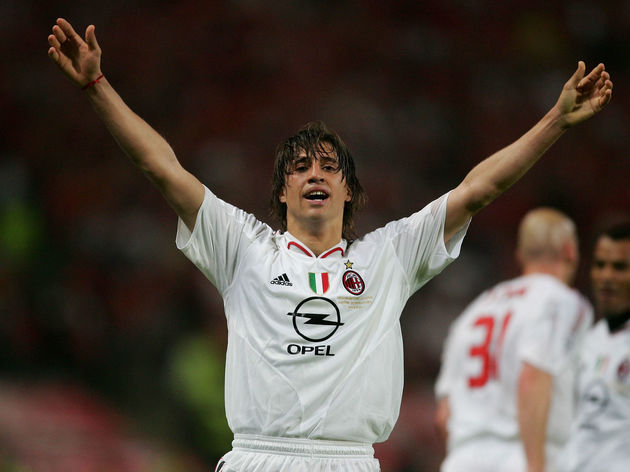 If Gerrard deserves a mention for his second-half performance, then Hernan Crespo deserves one for his showing before the break.

The Argentine tormented Liverpool’s defence, who simply could not compete with his movement. Crespo created plenty of chances for himself and even managed to net two of Milan’s goals within five minutes, and his second was particularly noteworthy as Crespo showcased his composure to chip the ball over the onrushing Jerzy Dudek to give his side a seemingly insurmountable lead.

We all know what happened after that, and it is the reason why Gerrard’s performance is remembered more fondly. However, Crespo put on a striker’s masterclass before that, and deserves his place in history. Andres Iniesta will go down as one of the greatest midfielders in history, and his performance in the 2009? final against ?Manchester United is exactly why.

The Spaniard, who had been a doubt for the game due to injury, put on a masterclass in creativity as he combined with fellow genius Xavi to tear United apart. It was Iniesta who created the opening goal for Samuel Eto’o, and he could have manufactured plenty more as he was an unrelenting wave of pressure on United’s back line.

Iniesta even had a number of chances to grab a goal for himself, but his focus was primarily on passing the ball. He did so with stunning precision, and he looked to be on a completely different level to everyone else on the field as he steered ?Barcelona to victory. ?Inter’s treble-winning 2009/10 season was a constant display of greatness, and Diego Milito was a vital part of Jose Mourinho’s machine.

?His link-up play with Wesley Sneijder was outstanding, and it led to Milito’s first goal as the Argentine showcased his speed and power to leave ?Bayern Munich’s defence scrambling behind him as he lobbed the ball over Hans-Jorg Butt. After the goal, Milito was everywhere, creating chances for himself and his teammates throughout.

He grabbed a second goal after the interval, as his dribbling skills made Barcelona’s 3-1 win over Manchester United in 2011 was an excellent team display, but ?Lionel Messi’s individual form was nothing short of brilliant.

In what was a Man of the Match performance, Messi could do no wrong. He would drop into the hole between midfield and defence, and use his combination of speed, dribbling and passing to orchestrate Barcelona’s dominant victory.

His movement dragged players out of position, allowing the Blaugrana to control the game throughout. He grabbed a deserved goal from distance after the break, but his performance was far more than just statistics. It was another superhuman showing from the Argentine wizard. ?The 2011/12 Champions League was something straight out of fiction, as ?Chelsea defied all odds to ultimately lift the trophy against Bayern Munich. As any fan will tell you, they have Didier Drogba to thank for that.

The Ivorian never disappointed in finals, and he stepped up his game again here. Often isolated as Chelsea were made to defend for their lives, Drogba’s pace and power kept the Blues in the game, putting in an incredible shift to remind Bayern’s defenders that they could not afford to switch off.

It was his stunning header which saved Chelsea from defeat, before he netted the winning penalty with what proved to be his final kick for the Blues, before leaving the club that summer. It was a storybook ending to a historic performance.