So say a number of bespectacled, basement-bound (harsh stereotyping required for the bit) 14-year-olds who manage club admins and like to make digital drawings of rabbits with placards saying funny ‘controversial stuff’ out of hyphens and dashes and brackets and stuff.

Well, not me. Not today. In my mind, there’s only one true break that can be called bad in this cruel, twisted world. And it’ll be breaking till the end of time.

In honour of the release of ‘El Camino‘, this is ’90min’s Definitive European Player Power Rankings: International Break Special’, brought to you by ‘Breaking Bad‘ Season Four.

For the International Break is not in danger, admins, IT IS THE DANGER! This is John McGinn. Standing in the rain. Celebrating his hat-trick. Against San Marino. Has one man ever been so Scottish? 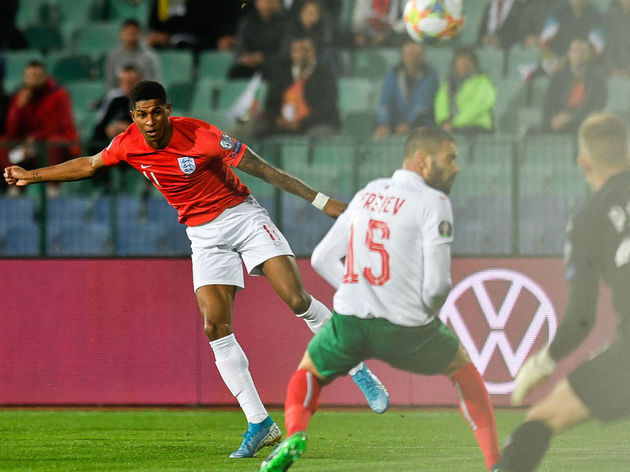 “Yeah, that’s cool and all, but I think I got like this cat? Think I’m like supposed to feed it.”

On a night marred by monstrosity, Marcus Rashford finally remembered he had a goalscoring habit that needed feeding. And feed it he did, with a swashbuckling net buster from an improbable angle after some intrepid work down the flank.

Nice work, Marcus. Your prize? A first placing in these here prestigious rankings…and an invitation to a 6-0 drubbing of your own at the Theatre of Dreams on Sunday, probably. Sorry son. Spain were looking to make it all about their resurgence on Friday night. They were trying, like, really hard – even if they did play Jesus Navas (who’s been 33 for almost 33 years now) at right-back.

And yet, they were upstaged. Upstaged by one man. One King. The King of the South Coast. The one that fights them, well, not on the beaches but, like, right next to it. The one that makes Timothee Chalamet look like the 14-year-old he’s…well, supposed to be I guess. “At least now we all understand each other.”

But that was then. Then being Friday. And a lot can happen in a weekend. Just ask the folks who rocked up to Bernie’s beach house.

And so it came to pass that King’s reign was short and sweet, and a new Rey was discovered just five nights later. And he has but one name. Rodrigo. I mean, sure, he’s also got ‘Moreno Machado’ tagged on in his birth certificate. But he dropped those. Just like the guys at ‘The Facebook’ and ‘The Joker’ before him. It’s cleaner, you know. “You know, mister, I’ve been providin’ my services for the past thirty-odd years. You’d think in that time I’d learn better than to ask a man his business. Especially not one referred by the lawyer. But I feel the urge to ask you, we strictly talking defence here?”

It seems, on Netherlands duty, we are talking strictly no defence. And that suits Gigi just fine, it seems. Well, no, it doesn’t seem. It is. He scored. Twice.

Look, he even broke out into dance at one point. The man’s a pent-up goalscoring machine/matinee idol waiting to be unleashed. What are you waiting for, Jurgen Klopp/Mel Brooks? “I’ve never used this stuff. Are you sure it will do the job?”

Germany are in a state of flux, that’s for sure. Hence the use of a number of new faces. And they did the job to… varying degrees of success. Kai Havertz? Exciting, but raw. Luca Waldschmidt? Raw, but…rangy?

In any case, it was Gundogan who was forced to set the tempo, and set he did, with two deflected goals and one delectable assist. Match winner for the Mannschaft. And boy did he shaft some men from Estonia, after Emre Can had done his best to shaft his own men in the 13th minute. In the face of a torrent of abuse from a number of braindead Nazis on the night of his first-ever outing for England, Tyrone Mings stood tall. He rose above the racists, delivering a man of the match performance from defence in a game that was won 6-0.

Of course, his accolades were dogged by the acts of these despicable zombies, but taking that out of the equation for a moment, it looks like the Three Lions may have finally found the man to partner Harry Maguire at the back. “Alright, let’s talk about Gale Boetticher. He was a good man and a good chemist and I cared about him. He didn’t deserve what happened to him. He didn’t deserve it at all. But I’d shoot him again and tomorrow and the next day and the day after that. When you make it Gale versus me, or Gale versus Jesse, Gale loses! Simple as that. This is on you, Gus, not me, not Jesse. I mean really, what’d you expect me to do? Just simply roll over and allow you to murder us? That I wouldn’t take measures – extreme measures – to defend myself? Wrong! Think again.”

Alright, let’s talk about Gareth Bale. He was a good footballer and a good golfer and I cared about him. He doesn’t deserve what’s happened to him at Real Madrid. But I’d play him for Wales again tomorrow and the next day and the day after that.

Because that’s the kind of performances he turns out for the Dragons. “I played the game, bro. They ain’t exactly fleet of foot. I’m saying, where’s the challenge? At least the zombies in Left 4 Dead clock a respectable 40. You gotta lead ’em and sh*t.”

He has 51 goals in 83 Belgium appearances. He definitely leads ’em and sh*t. “Who’d have thought that someday I would be handing these keys to you?”

A win against Liechtenstein in their next game will ensure Finland qualify for their first-ever European Championships. And it’s all – mainly – down to this man. In a competitive group, the Finns have held their own.

Who’d have thought that someday they’d be turning out at tournaments like this?

Who’d have thought that someday I would be handing the keys to the EPPR HQ to Teemu Pukki?

But both are on the brink of happening. MVP! MVP! MVP! “I had to go to three different places to get the moisturiser that you liked, but I got that and I got your Shiner Bock and your chips and – I couldn’t resist – the complete encyclopedia to fantasy football. Look, it has all the latest rankings.”

Andrea Belotti had to go to Liechtenstein to nab a spot in the latest rankings, but he’s done it now and that’s all that matters.

I mean, it’s a shame he didn’t do in that gorgeous green kit, but I guess he did it all the same. “Gus, you do this, all you’ll have left is an $8 million hole in the ground.”

He has more goals than Eric Cantona and Franck Ribery combined and ten more than the sum of Nicolas Anelka and Robert Pires’ efforts.

This should be said more. Especially to the guys at Chelsea, who seem to think they’d be better off with an £8m hole in the ground.

“Who are you talking to right now? Who is it you think you see? Do you know how much I make a year? I mean, even if I told you, you wouldn’t believe it. Do you know what would happen if I suddenly decided to stop going into work? A business big enough that it could be listed on the NASDAQ goes belly up. Disappears! It ceases to exist without me. No, you clearly don’t know who you’re talking to, so let me clue you in. I am not in danger, Skyler. I am the danger! A guy opens his door and gets shot and you think that of me? No. I am the one who knocks!”

Yes, Cristiano Ronaldo is a new entry. With his 700th career goal against Ukraine, the wee lad finally did enough to warrant a place in these here rankings.

Apparently, he wasn’t too happy about his previous snubs. “Is there something about you I don’t know? Are you a former Navy SEAL? Do you have to have your hands registered as lethal weapons?”

And, presumably, CR7 won’t be too happy about getting plumped behind big man extraordinaire Artem Dzyuba. But hey, Portugal couldn’t even beat Ukraine, whereas we all know what Russia can do to their neighbours when they get the chance…

…Anyway, the 2018 World Cup hosts won both their qualifiers with an aggregate score of 9-0, and Dzyuba was at the heart of all their best moments. He’s a monster. A delicate one. But a monster all the same. Hell, we can’t even fit his entire wingspan in. “Hey, nobody appreciates a passionate woman more than I do, but in this business – and Walt can back me up on this – the number one rule is: ‘Don’t take things personal’.”

Despite an admirable charge from Teemu Pukki, there’s only one man who can really be described as EPPR’s 2019/20 MVP so far, and that’s Robert Lewandowski.

With yet another hat-trick against Latvia, the Pole confirmed his place atop the footballing world, and secured his side’s progression to Euro 2020 a game later against Macedonia.

He takes things personally, alright, but he never lets them cloud his vision. The same goes with those passionate women, I suppose.