The Africa Cup of Nations 2019 edition comes to a close on Friday evening as Senegal vie for their first-ever title against a free-scoring Algeria in Cairo.

Bonafide superstars of European football like Kalidou Koulibaly, Riyad Mahrez and Sadio Mane all have the chance to become card-carrying legends for their countries, while the latter even admitted that winning ?AFCON would mean more to him than the Champions League medal he picked up with Liverpool just a month and a bit ago.

As the class of 2019 eye immortality, here’s an all-time XI of the tournament’s greatest stars… Lauren (RB) – An ‘Invincible’ with Arsenal in 2004, Lauren is a two-time AFCON winner (2000, 2002) with the dominant Cameroon side of the early noughties that also won Olympic gold in 2000. His AFCON highlight came when he scored in the penalty shootout victory against Senegal in the 2002 final to retain the trophy.

Arthur Boka (LB) – Although never an AFCON winner, Ivory Coast’s Arthur Boka earns a place in the side for playing at five tournaments between 2006 and 2013, twice finishing on the wrong end of a penalty shootout defeat in the final. The pacey full back once dubbed the ‘African Roberto Carlos’ also won the Bundesliga against the odds with Stuttgart in 2007.

Rigobert Song (CB) – With eight tournaments under his belt, no-one has played at more AFCONs than former Liverpool, West Ham and Galatasaray star Song. He was captain as the Indomitable Lions won in 2000 and 2002 and was still wearing the armband in 2008 when they lost to Egypt in the final. The uncle of former Arsenal star Alex Song, he finished his international career in 2010 with 137 caps.

Wael Gomaa (CB) – One of the finest defenders never to play in Europe, Gomaa was a key member of the Egypt side that won the 2006 trophy and then defended it in 2008 and in 2010.

The bald enforcer, who featured in all three of those tournaments’ Best XIs, retired in 2014 with six CAF Champions League titles to go with his AFCON medals. 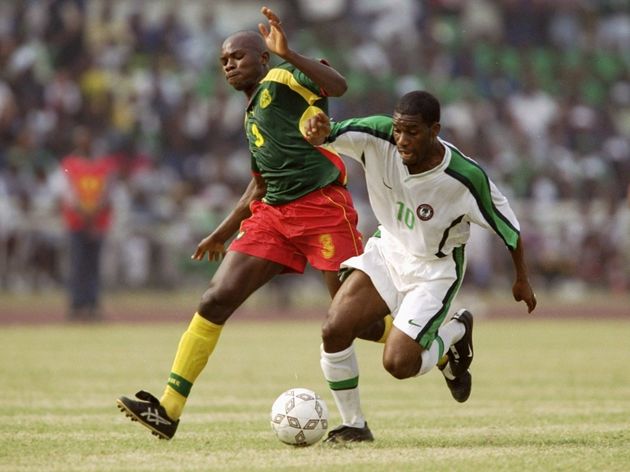 Geremi (CM) – An invaluably versatile operator, Geremi could play at the back on the right or in central midfield. He made seven AFCON squads for Cameroon winning twice in 2000 and 2002 alongside Lauren and Song. Among his other career honours, the free-kick specialist won two Premier Leagues, the UEFA Champions League and an Olympic gold.

Abedi Pele (CM) – Regarded as one of the finest African footballers of all time and one of the first to make waves on the European game, Pele was also successful on his own continent, winning AFCON with Ghana in 1982 as a teenager. He scored three times and was named the tournament’s Best Player as the Black Stars returned to the final in 1992.

Jay-Jay Okocha (CM) – One of the most entertaining footballers to watch in the history of the modern game, Okocha’s dribbling, skill and invention saw him crowned Nigerian Footballer of the Year seven times. A key part of the 1994 AFCON winning Nigeria team, Okocha also won the tournament’s Golden Boot and Best Player award in 2004. Mohamed Aboutrika (FW) – The talisman of Egypt’s AFCON wins in 2006 and 2008, the tricky forward is a bonafide legend in his homeland whose popularity is perhaps only just being matched by Mohamed Salah. The ‘Prince of Hearts’ scored the winning penalty against Ivory Coast in the final of AFCON 2006, while he coolly slotted a second-half winner past Carlos Kameni in 2008 to give Egypt a 1-0 win over Cameroon in the 2008 final.

Hossam Hassan (FW) – Representing the Pharaohs at seven AFCONs, Hassan is still Egypt’s all-time top scorer with 69 goals and, with 169 caps, is the second-most capped player in international football history. First winning AFCON in 1986, he then captained Egypt to their win on home soil in 2006 at the grand old age of 40. Herve Renard – There can be only one. The immaculately dressed, unbuttoned Frenchman is the only manager to have won the tournament with two different nations, having led underdogs Zambia to improbable success in 2012 before repeating the feat three years later with Ivory Coast.