After a successful playing career, Antonio Conte announced himself to the world with a superb first full season at Serie B side Bari.

The charismatic Italian implemented an efficient but effective style of play, as the club won the title and earned promotion back to Serie A in 2009. This was the Italian’s first major honour as a manager, and was a real breakthrough for Conte in the management world, as bigger clubs began take notice of his credentials. Following on from his success at Bari, Conte became a candidate for every top job in Italy. He eventually landed the Juventus job in 2011 – a club he made 295 appearances for as a player, winning five ?Serie A titles in his time.

Conte’s first season in charge would be the surprising start of a golden era for Juventus. After two consecutive seventh place finishes, La Vecchia Signora under the guidance of Conte would go on an astonishing unbeaten run to win the Scudetto.

This first Serie A title since 2006 would ring in a historic run of domestic success for Juve. In 2014, Antonio Conte, after winning two consecutive league titles, led Juventus to their third in as many year in the most impressive fashion to date.

Conte’s Juve would win the title in record breaking fashion, with the most points (102) and most wins (33) in Serie A history. After his third and final title win at Juve, Antonio Conte shockingly left the club to pursue a new challenge. He decided to brave the harsh and unforgiving world of international football, leading Italy into Euro 2016.

Although Conte did not deliver silverware, the tournament was a huge success for Conte’s less-than-vintage Azzurri team, as his astute defensive organisation received world-wide praise. He managed to drag a lacklustre Italy all the way to a quarter final penalty shootout, where they would lose to Germany.

The standout performance of the tournament was the clinic his side put on against the immensely talented Belgium, whom Italy comfortably beat in the group stages 2-0. Arguably Antonio Conte’s most impressive managerial feat to date came in his first season in charge of Chelsea, where he would shockingly win the Premier League title at the first time of asking.

Conte took to management in England like a duck to water. He set a new club record of 11 consecutive league wins in December 2016 and became the first manager in history to win three consecutive Premier League Manager of the Month Awards. ? 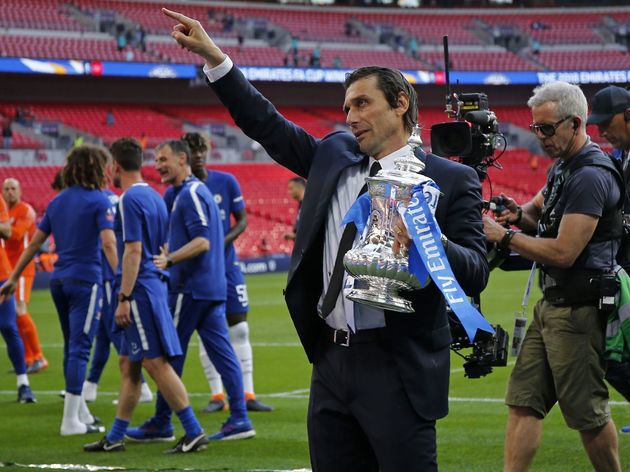 Despite the uncertainty surrounding Conte’s future during the following season, he still managed to deliver a trophy for the Blues in his second season in charge.

A narrow 1-0 victory over Manchester United handed Chelsea an eighth FA Cup title. This was a proud moment for Conte as it was his first ever cup competition win as a manager.