Barcelona came from behind to beat a resolute Inter 2-1 at the Camp Nou on Wednesday night.

There were just two minutes on the clock when Inter took the lead, catching Barcelona out with a quick free kick which pinged off a couple of players before being slipped through to L

Nelson Semedo’s inclusion at left-back highlighted just how important Jordi Alba is to Barcelona, especially in attack. With the majority of Barcelona play coming through the middle, Semedo cutting back onto the comfort of right foot played into Inter hands. It took until the 53rd minute for Semedo’s first left-footed cross.

Fullbacks are probably the most important position in football these days. Guardiola has spent almost 200m on them at City.

Barça have Roberto and Semedo starting in 2019

You can’t expect Griezmann to turn into Neymar if you play him at LW. He’s not that kind of a player so why even put him there in the first place? Barcelona need a wingback in January at all costs, you can’t always keep playing Semedo at LB when Alba isn’t fit. #BarçaInter 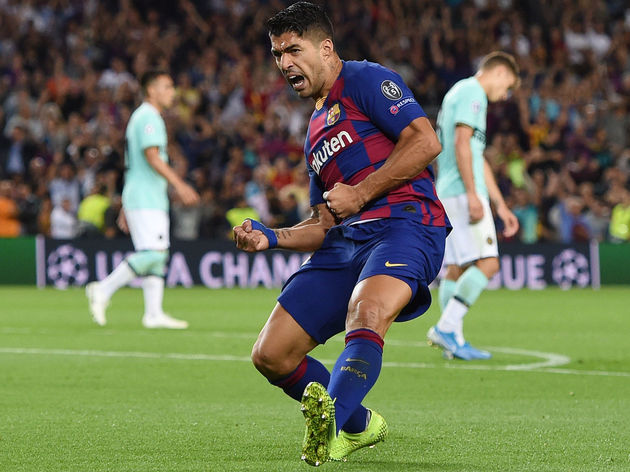 Who else? Barcelona’s attacking three coughed and spluttered at times, but not Suarez. While Messi’s fitness issues were evident and Griezmann looked like a man struggling to settle into his new side, Barcelona needed the Uruguayan to step up to the plate.

He obliged in style, equalising with that fantastic volley and showing composure to add the second goal. But it was more than just his goals, his work rate has always been a key component of his game and those energy reserves were needed here as Inter defended as a unit.

He will be hoping that Vidal’s name is on the team sheet in the coming weeks, because Barcelona looked blunt in attack before his introduction. The front three might be world class but they can’t do it alone – at least not every week – and E

Antonio Conte seems to have transformed ?Inter into a ruthless machine, in Serie A at least,

Inter looked like they’d be leaving Camp Nou with a point, so Conte will be furious that a momentary lapse in concentration allowed Barcelona to score their second.

A night like this called for cool heads and discipline in midfield. You can’t fault any of the Inter trio for their application and concentration, but it was Stefano Sensi’s desire to get forward that made him stand out from the crowd (and it was a very crowded midfield indeed).

He set the tone early on for his role in the opening goal and continued to press with tenacity, moving up to support the Inter attack. When Inter countered it was by playing out from the back and Sensi was vital in connecting the defence with Sanchez and Martinez – epitomised by his pinpoint cross that the former headed just wide. He was unlucky to see his own shot sail over the bar just before half time.

Inter face their toughest ?Serie A test of the season on Sunday, as champions Juventus visit San Siro for the