?Since Italy won their maiden European Championship in 1968, they’ve fallen in two finals, with Gli Azzurri making the last-four on a couple of other occasions.

Despite the fact they’ve not ruled the continent in over half a century, this is a nation that’s synonymous with football. They’ve played a key role in the development of the sport throughout history, providing countless superstars along the way.

Here’s our take on Italy’s all-time greatest XI at the Euros, ranging from their 20th-century champions to modern legends of the game. Dino Zoff was a marvellous goalkeeper in his own right, but no one can challenge Gianluigi Buffon for the Italy gloves.

If it weren’t for a knee injury in 2000, the 42-year-old would be the only player in history to have appeared at five different European Championships. Still, he holds the record for most appearances in the competition, including the qualifying rounds.

In his prime, there wasn’t a safer pair of hands than Buffon. He’s a true giant of football, and a worthy number one. Gianluca Zambrotta was entrusted with the role of right-back in three straight editions of the tournament, the former right midfielder being used to brilliant effect after transitioning to defence.

His offensive skill-set added a new dimension to Gli Azzurri’s attack, while he also proved a hit in the backline, helping the side concede just eight goals in the 12 games he played at championships.

Whereas many of his counterparts were primarily focused on their defensive duties, Zambrotta’s engine allowed him to ceaselessly bomb up and down the pitch, offering a blueprint for future wing-backs. A marauding centre-half, Franco Baresi was the heart and soul of the team in the ’80s and ’90s, his domineering style of play earning him a place in Italian footballing folklore.

He was called up by his country for a hat-trick of European Championships, with the ?Milan skipper’s When Paolo Maldini made his Azzurri debut, Rick Astley, Phil Collins and Cliff Richard were top of the charts. By the time he stepped down from international duty, Shakira and Eminem were leading the new wave of music.

One of the great centurions of Italy, the defender went from fresh-faced teenager to inspirational captain during his 14 years of representing the country. You’ll struggle to find many sub-par displays in that period.

With Maldini in the heart of defence, this lineup would be racking up the clean-sheets. 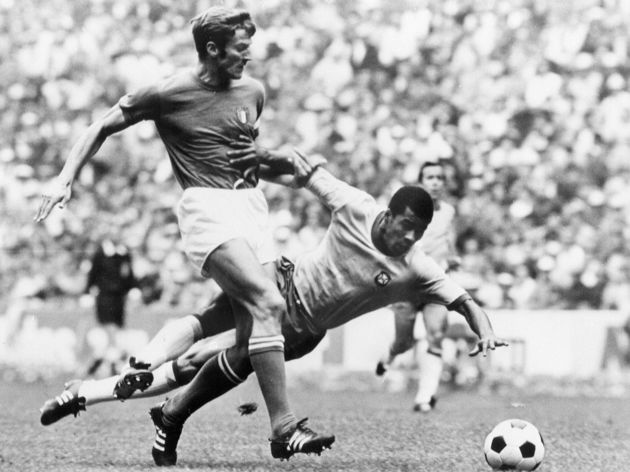 Gianni Rivera was the archetypal number 10.

More like a ballet dancer than a footballer, the playmaker’s elegance and poise reflected the values of his country. Those qualities were instrumental to Italy’s triumph in ’68, with Rivera continuing his rich vein of form into the final of the tournament.

Though he failed to score a goal that year, he brought his best for the showdown with Yugoslavia, the midfielder electrifying a jubilant home crowd as he guided Gli Azzurri to victory. Mario Balotelli’s career could have been truly special. As a teenager at Inter, he looked destined for the top. By the summer of 2012, he’d made good on that potential, winning the ?Premier League with ?Manchester City, as well as firing Italy to the European Championships final.

Since then, however, things have taken a turn for the worse. After spending several seasons as  bit of a nomad, he’s back at Brescia, the club he supported as a boy. Despite dropping out of the limelight, the striker remains a household name.

His breathtaking strike in Italy’s 2-1 win over Germany in the semi finals of Euro 2012 was a goal of the highest calibre, and it certainly helped him enter Italian football’s hall of fame.

What followed was nothing short of iconic, with Balotelli’s celebration trumping the thunderous half-volley he’d just scored. Super Mario somehow managed to overshadow himself, going full Hulk-mode to mark his third of the campaign and break the internet.