Olivier Giroud again showed why he can never be written off, scoring two late goals as AC Milan rallied to beat rivals Inter Milan 2-1 and reignite the Serie A title race.

Milan moved one point behind the defending champions and leaders with victory, although Inter have played one game fewer.

Midfielder Ivan Perisic put Inter ahead when he volleyed in from just inside the penalty area in the 39th minute from a corner.

Four minutes later, Giroud produced a superb flick with his right foot to spin around his marker inside the area, before curling the ball under the body of goalkeeper Samir Handanovic with his left.

He jumped into the arms of coach Stefano Pioli after the final whistle, his name written alongside other match-winners at the Derby della Madonnina.

Milan finished with 10 players after left-back Theo Hernandez was sent off in the fifth minute of injury time, and Inter coach Simone Inzaghi will have regrets.

His side could have been well ahead, but Milan goalkeeper Mike Maignan showed just why he is pushing to become France’s No 1 at the World Cup in Qatar later this year.

He made a fine reflex save to keep out Marcelo Brozovic’s deflected 20-yard shot, then another stop from Denzel Dumfries’ low strike.

After Handanovic launched himself to the left to keep out Sandro Tonali’s thunderous strike from 25 metres out 10 minutes before half-time, Maignan thwarted Lautaro Martinez at the other end.

He was beaten when Perisic put the ball beyond his reach from former Milan midfielder Hakan Calhanoglu’s corner.

But after Calhanoglu latched onto Brozovic’s superb pass in first-half injury time, as Inter again attacked down the left flank, Maignan showed brilliant judgment to rush off his line and make a sliding tackle.

Elsewhere, Fiorentina hosted Lazio with both sides sitting on the same points tally and needing a win to level with sixth-place Roma, who had earlier drawn 0-0 at home to struggling Genoa.

Roma midfielder Nicolo Zaniolo wheeled away in delight and tore off his shirt after drilling in a last-minute shot, but then was sent off for protesting to referee Rosario Abisso after his effort was disallowed following a VAR review. It showed a clear foul by Roma striker Tammy Abraham on a defender moments before the goal.

Genoa had defender Leo Ostigard sent off in the 68th minute for grabbing forward Felix Afena-Gyan around the neck and dragging him down.

Bundesliga: Lewandowski back in goals as Bayern extend lead 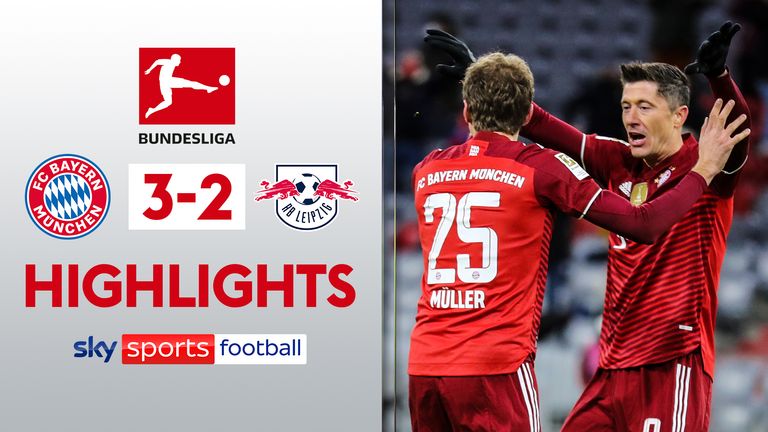 Highlights of the Bundesliga match between Bayern Munich and RB Leipzig

Robert Lewandowski ended his one-game scoring drought as his 24th goal in 21 games helped Bayern Munich stretch their Bundesliga lead to nine points with a 3-2 win over visiting RB Leipzig.

The prolific Lewandowski, who hadn’t scored in the 4-1 win at Hertha Berlin before the international break, met Kingsley Coman’s precise cross with a thumping header to give Bayern a 2-1 lead over Leipzig before the break.

Thomas Muller opened the scoring in the 12th minute, finishing off the rebound after Peter Gulacsi saved Lewandowski’s initial effort.

Andre Silva equalised shortly before the half-hour mark, squeezing the ball over the line after good work from Konrad Laimer and Christopher Nkunku.

Muller had a goal ruled out through VAR for a foul by Lewandowski in the build=up, but Lewandowski atoned by restoring Bayern’s lead a minute before the interval.

Laimer set up Nkunku for antoher equaliser in the 53rd minute with a brilliant through ball on the left. Nkunku stayed cool before shooting through Manuel Neuer’s legs.

Bayern answered again soon after though, when Josko Gvardiol deflected Serge Gnabry’s cross into his own net.

Gladbach at least ended their three-game losing run across all competitions, but coach Adi Hutter remains under pressure with the team just two points above the relegation zone. Bielefeld stretched their unbeaten streak to six games.

Janni Serra opened the scoring in the 19th minute when he eluded three Gladbach defenders and let fly inside the left corner.

The home team were by far the better side until Alassane Plea equalized with a diving header to Jonas Hofmann’s lay-off in the 38th minute.

But Gladbach might have grabbed a late winner, with Hofmann in particular failing to make more of some good counterattacking opportunities.

Union Berlin remained fourth despite losing 2-0 at Augsburg in their first game since top scorer Max Kruse the club. Augsburg climbed out of the relegation zone with the win.

Freiburg remained fifth despite a 1-0 defeat in Cologne. Cologne were without coach Steffen Baumgart due to COVID-19, but welcomed back 10,000 fans.

Ajdin Hrustic’s second goal proved to be the winner for Eintracht Frankfurt which won 3-2 at Stuttgart, and Mainz beat visiting Hoffenheim 2-0.

Anthony Martial made his debut for Sevilla but his new side missed the chance to close the gap on La Liga leaders Real Madrid when they were held to a goalless draw with Osasuna, for whom goalkeeper Sergio Herrera saved a penalty.

Attacking midfielder Brais Mendez scored both goals in Celta Vigo‘s 2-0 win over Rayo Vallecano and Pere Milla netted twice in Elche’s 3-1 win over Alaves, while Mallorca came from behind to beat Cadiz 2-1.

Saint-Etienne lifted themselves off the foot of Ligue 1 with a shock 3-1 win over Montpellier.

Teenager Ely Wahi put the visitors in front after 11 minutes and the lead lasted until eight minutes from time when the game took a dramatic turn.

Romain Hamouma equalised, Arnaud Nordin put the home side in front for the first time on the stroke of 90 minutes and Wahbi Khazri added a third in stoppage time to complete the transformation.

In the other game, Monaco were 2-0 winners over Lyon.