?Inter failed to qualify for the Champions League knockout stages after falling to a 2-1 home defeat to Barcelona on Tuesday night – having needed to match or better Borussia Dortmund’s result against Slavia Praha to progress.

A pulsating first half of Champions League football got underway in an enthralling end-to-end manner. Danilo D’Ambrosio and Romelu Lukaku spurned good openings for the hosts while Carles Perez almost caught out Samir Handanovic with a fierce drive from the left at the other end.

Despite the Nerazzurri looking the more likely, it was Ernesto Valverde’s men who took the lead through Perez. A driving run from Jean-Clair Todibo started the move with the ball eventually finding Antione Griezmann, the Frenchman playing a direct pass into the feet for Arturo Vidal only for Diego Godin to intervene – only for the Uruguayan’s touch to lay the ball on a plate for Perez, who made no mistake. Just when Barça looked like they’d take a 1-0 advantage going into the break, Inter equalised. An exceptional bit of hold-up play from Lautaro – who held off the 6’2 Todibo expertly – led to the Argentine setting up Lukaku, whose strike was deflected past Barça debutant Neto.

After a nervy start to the second period, Barça started to threaten in transition as Inter searched for a second – one they should’ve had through Lukaku, but his strike on the half-volley was straight at Neto.

With Dortmund’s lead meaning the home side needed a winner, Conte threw the kitchen sink at the Catalans, sending on Valentino Lazaro, Matteo Politano and Sebastiano Esposito in a bid to get that all-important goal.

The final goal, however, came at the other end as substitute Ansu Fati gave Barça a 2-1 lead, emphatically driving home from outside the area shortly after being brought on, the 17-year-old becoming the competition’s youngest ever goalscorer while knocking out Inter in the process.

Antonio Conte will be bitterly disappointed that his side weren’t able to progress to the knockout stages after having more than enough chances to overcome the Catalan giants. Conte’s side were intense early on and forced the visitors into uncharacteristic unforced errors, but they failed to capitalise on a few good chances, with Barça improved after taking the lead.

Despite equalising through Lukaku just before the break, they failed to improve for much of the second half in their overall play – generally lacking creativity through the middle and lacking any quality from wide areas.

Any opportunities Inter created were through the tireless work of the top two, and they certainly had enough quality chances to win the game. Fati’s late winner, however, prevented a grandstand finish in Milan and the hosts will have to settle for the Europa League.

The legend of Lautaro Martinez continues to grow, with yet another fantastic display on Tuesday night.

Although he was unable to get on the scoresheet – having two goals ruled out for offside in the second half – the diminutive Argentine was superb out of possession, constantly hassling Barca’s three centre-halves, while his superb hold-up play was on full display – setting up Lukaku for Inter’s only goal of the game.

Oh my word that is world class from Lautaro Martinez. Some of the best holdup play you will see all year.

He is so strong and his center of gravity is so low – absolutely destroys Todibo on the assist to Lukaku.

Lautaro is a beast. The way he holds away his defender while also having the skill to control it and turn it into a goal scoring opportunity reminds me of prime Suarez. This guy has all the attributes to be the next 9 for us. A no brainier for this summer.

Monster performance by Lautaro. True raging bull out there

On what was a disappointing night for the Nerazzurri, Lautaro certainly didn’t deserve to be on the losing side, and he’s a player who shouldn’t be playing Europa League football in 2020.

Despite Valverde making seven changes from the side that dispatched Mallorca on the weekend, his players certainly looked up for it as they tried to impress their Spanish boss.

After initially struggling to cope with Inter’s high press, one they rarely find themselves up against in La Liga, Perez’s goal against the run of play settled them down nicely. Vintage Barça soon came out and they looked the more likely side to get the second goal before Lukaku’s equaliser. 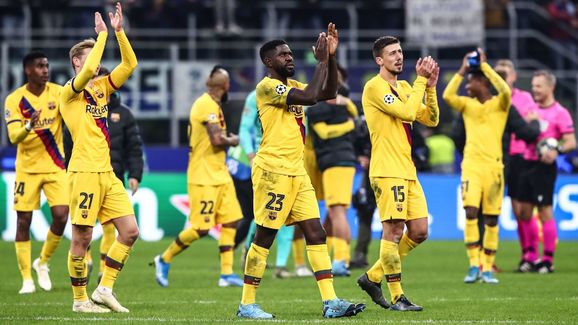 They defended resolutely in the second period while looking incredibly dangerous in transition as the game wore on – eventually scoring the winner through substitute Fati.

On the whole, Valverde will be thrilled with his side’s work at San Siro, with many second-stringers proving their worth and the likes of Frenkie de Jong and Luis Suarez only appearing off the bench.

It truly is remarkable that Carles Alena is probably sixth in Valverde’s central midfield pecking order at the moment. While others around him struggled to deal with the Nerazzurri’s intensity early on, the 21-year-old made it look easy.

Barcelona, meanwhile, have a tricky week ahead of them. They first take on the exciting Real Sociedad away from home in La Liga