?Pictures of Inter’s new away kit for the 2019/20 season have been leaked, revealing a break from tradition with a bold and distinctive new colour that’s sure to divide opinion.

Many fans may have predicted a fresh new look, after images of the new home kit surfaced earlier in the week. Whilst the change here was nowhere near as drastic as the away strip, the inclusion of a section of diagonal stripes to break up the traditional vertical black and blue was clearly a sign of change.

The new Nike kit is a basic design, with the stripes of the home jersey replaced with a one-toned strip of teal. The striking colour combines with the classic Pirelli logo emblazoned across the front, as well as the Nike swoosh and Inter badge finished in an understated black and gold design.

The same colour scheme is used for the v-neck collar, the sleeves, and the back neck taping – all of which feature a black base with a thin gold line running through the middle.

The I Nerazurri faithful will be hoping that a new look might help them to freshen things up in Serie A next season, and break the eight-year vice grip that Juventus have held on the league. 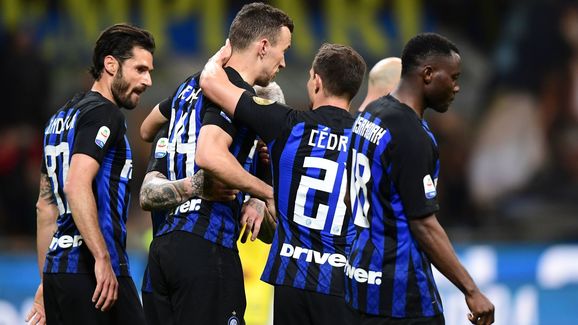 However, there is still business to be attended to this season, with Inter needing to navigate their way through a difficult fixture away to Napoli followed by a showdown against Empoli at the San Siro, in order to ensure qualification for next season’s Champions League.