Recent speculation from Brazil had put Inter in ‘pole position’ to land Malcom, while a pair of Italian reports alleged that Milan are eyeing the 22-year-old and set up a meeting between Rossoneri sporting director Leonardo and Malcom’s representatives. But Menez Garcia has denied that there has been any contact with either of the Milan giants, or indeed any other clubs with regard to his client’s future.

“I’m not talking to any club,” the agent told Mundo Deportivo, with the Catalan newspaper also explaining that Malcom does not wish to consider the future until the end of the season.

Having emerged as a potential superstar in the making at Bordeaux, Malcom has endured a difficult first year at Camp Nou after Barça swooped in with a €41m offer at the 11th hour to stop what looked to be an all but confirmed move to Roma.

Competing against the likes of Lionel Messi, Luis Suarez, Ousmane Dembele and Philippe Coutinho has unsurprisingly left the Brazilian struggling for opportunities. 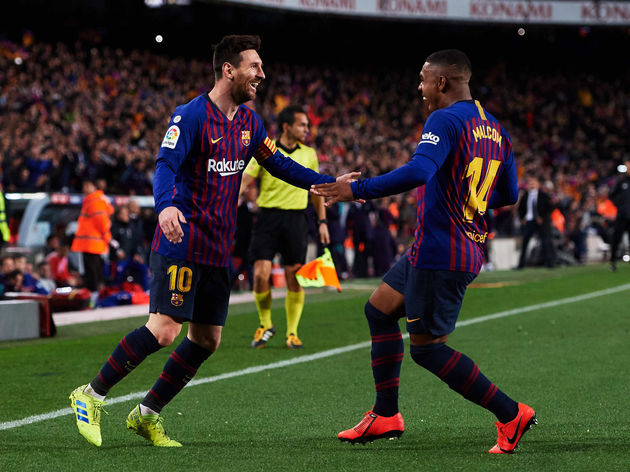 Also linked recently with Arsenal and Tottenham, Mal has appeared in only 19 games in all competitions all seasons, starting just three times in La Liga. Malcom did score and assist in the 4-4 draw with Villarreal, but failure to make an impact when given a full 90 minutes as part of a rotated team in the 0-0 against Huesca hasn’t helped.

Barça can wrap up an eighth La Liga title in 11 years if they beat Levante at Camp Nou on Saturday, regardless of what second place Atletico Madrid do against Real Valladolid.