Inter came from behind to beat Paris Saint-Germain on penalties to seal their second victory of pre-season in Macau on Saturday.

PSG did not perform well at all and had goalkeeper Alphonse Areola to thank for keeping the score down, as he kept the Milan club out with a number of excellent saves.

?Inter had the better of the opening exchanges and were unlucky not to find themselves ahead early on, as they peppered the PSG goal with shot after shot. Were it not for Areola, the

The Italians continued to pile on the pressure, but were made to pay for their lack of cutting edge when Thilo Kehrer headed the ball in off the bar just before half-time to give his side the advantage at the break. Thomas Tuchel kept his side in the dressing room for a prolonged team-talk, presumably to remonstrate with them for a poor first half display. Whatever he said did not seem to work though, as less than 60 seconds in, ?Ivan Perisic had a glorious opportunity to draw level, only for Areola to produce yet another great stop.

In a match severely lacking quality in both boxes, the chances began to fall to both teams, but neither were able to take advantage. As both managers began to make substitutions, the match looked to be petering out until Samuele Longo burst through to equalise with the final kick of normal time. 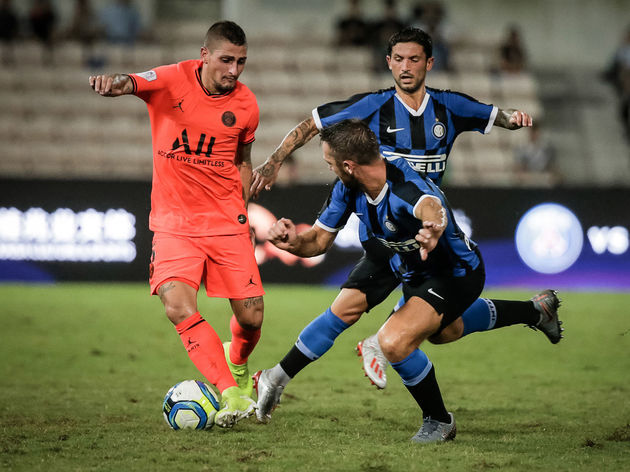 The match went to penalties, where Inter went ahead and had one penalty to win it. However, Antonio Candreva’s attempted Panenka hit the crossbar, giving PSG a lifeline. Another save from Samir Handanovic gave Inter one more chance to seal victory from the spot and this time Joao Mario made no mistake, rifling the ball into the roof of the net to seal victory for Inter.

PSG fans will not be encouraged by what they saw from their side on Saturday, as they looked second best throughout against an imposing Inter team. The club’s ownership are clearly desperate to bring the ?Champions League trophy to Paris, but the players showed no signs of the quality needed to achieve that. 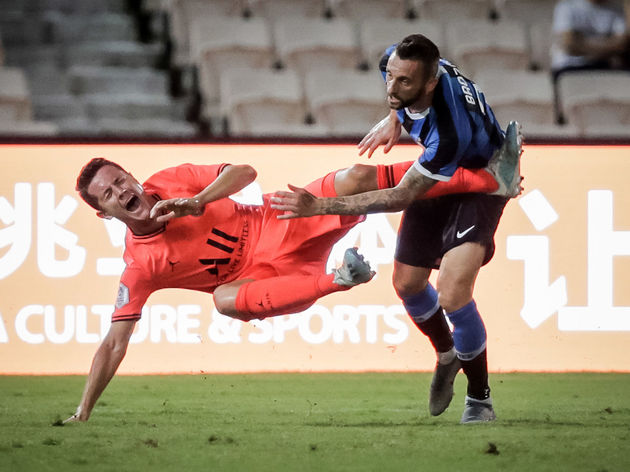 Inter had the lion’s share of the chances and were it not for the imperious figure of Areola in goal, PSG could have conceded a hatful. The French stopper won’t bail them out of every game, so Tuchel will need to find a way to improve his side’s performances if the Parisiens are to be successful in Europe this year.

STAR MAN – Despite all the attacking talent at their disposal, without a doubt PSG’s star player was their goalkeeper Alphonse Areola. The Frenchman singlehandedly kept his side in the game in the face of severe pressure from their Italian opponents.

Areola has been brilliant behind a very makeshift, and not very good defensive back line. #PSGInter

Areola bails out his defense with a great save after some comical defending from PSG. Tuchel kept his squad in the dressing room longer than usual at halftime for that? #PSGINT

Several first-half saves kept the scores level and allowed his team to take the lead on 41 minutes when Kehrer headed in from a free-kick. The keeper prevented PSG from being on the end of an embarrassing scoreline and continued that form into the second half, where once again he was called upon due to the lacklustre defending in front of him.

Alas, Areola was eventually beaten with the last kick of normal time, which sent the tie to penalties. Unfortunately, he couldn’t make himself the hero once again, as Inter won 6-5 in the shootout.

Inter’s main shortfall was in front of goal. Despite several glorious chances, the ?Serie A side could not take the lead in the first half and were eventually punished by their opponents just before the break.

Areola keeping PSG in the game. Inter really getting stronger in performance every pre season game.

Need strikers asap though, else all the chances created gonna go to waste. Lautaro joining next week will help.#PSGINT

Im actually getting sick of Inter and the inability to sign a striker. This whole preseason is a waste if the team is incomplete. Going to need months during the season to get the new strikers into the system.

Antonio Conte has made no secret of his search for a striker this summer, as Inter have chased ?Manchester United’s Romelu Lukaku for several months. Whether they are successful in their pursuit of the Belgian remains to be seen, but what is clear for now is that the Milan club need some firepower up front.

Perisic struggled as a makeshift striker and he will not be sufficient for an entire season if Inter are to challenge for the Scudetto. New striker Samuele Longo made a case for himself, grabbing an equaliser with the last kick of the game, but the club’s need for attacking reinforcements remains clear for all to see.

STAR MAN – Nicolo Barella was excellent in the centre of midfield for Inter and many of their attacking moves came through the young Italian. Barella joined Conte’s side from Cagliari earlier this summer and his influence in the team is already showing, as he controlled the game all the time he was on the pitch.

The 22-year-old survived a scare when Abdou Diallo awkwardly fell on his leg and he battled on and continued to set the tempo for the rest of his time on the pitch. Inter certainly have a great player on their hands and if they can add an out-and-out goalscorer to their attack, the young Italian is sure to rack up the assists this season.

Next up for PSG they face Sydney FC, as the?y continue their preparations for the 2019/20 Ligue 1 season, which begins on 11 August.

Meanwhile, Inter face Tottenham Hotspur next, as Antonio Conte looks to get his squad in shape so the Milan club prepare their fight for the Serie A title.