Inter proved they could cope without star player Mauro Icardi as they defeated Rapid Wien 1-0 in the first leg of their Europa League round of 32 clash at the Allianz Stadion on Thursday.

The Nerazzurri dominated the first half without posing too much of a threat to the Rapid goal, until referee Tobias Stieler awarded the Italian side a penalty after Lautaro Martinez was fouled by Manuel Thurnwald.

??Martinez picked himself up to take the penalty, smashing the ball down the centre of Strebinger’s goal to put ?Inter a goal to the good in Austria with his seventh goal of the season.

Rapid should have scored when Valon Berisha worked his way to the byline before sliding a ball across the box to an unmarked Knasmullner, whose first time drive was terrifically stopped by a quick reaction save from Slovenian Samir Handanovic.

The chance for Knasmuller proved to be Rapid’s best chance of the game, as they failed to muster any other shots on target during the 90 minutes, as Inter held on to take a slender 1-0 lead back to Italy.

With Inter dropping down from the Champions League into the Europa League, Rapid Wien were undoubtedly underdogs going into the game after they qualified for the knockout rounds. In truth, Rapid Wien never really threatened an upset as Inter controlled the game. They face a tough task of turning the game around at San Siro in the second leg.

After a disgruntled ?Mauro Icardi refused to travel to Vienna for the game due to being stripped of the captaincy, it was going to be interesting to see how his Inter teammates responded to his absence. Inter did what they had to do without being spectacular. They grabbed an away goal, which sets them up nicely for the home return leg. Icardi’s replacement Lautaro Martinez also put in a decent display, perhaps showing Nerazzurri fans that the club could cope without their top scorer.

STAR MAN – Argentinian striker Lautaro Martinez lead the line in the absence of former club captain Mauro Icardi and took his opportunity to impress, winning and converting a first half penalty to give Inter the advantage going into the return leg.

The 21-year-old showed bags of energy and flair, as he proved a constant threat for the Rapid defenders. 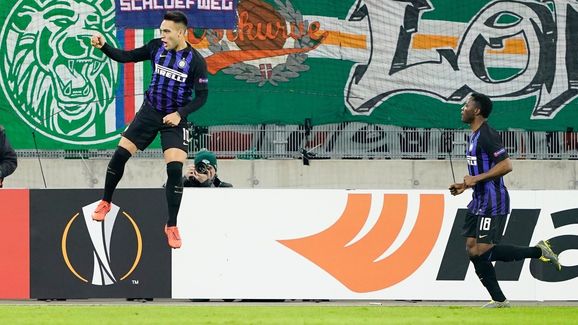 WORST PLAYER – It was a clumsy performance from Portugal international Cedric. The on-loan Southampton full-back looked rusty as he mistimed several challenges during the game.

Rapid Wien have a Austrian Cup quarter final to contest on Sunday, as they take on Hartberg at the Allianz Stadion.

Inter travel to Sampdoria on Sunday in ?Serie A as they continue to try to establish their position within the top four.