Inter will know victory over Barcelona on matchday six will see them progress to the Champions League knockout stages following their 3-1 win over Slavia Prague at the Sinobo Stadium on Wednesday night.

Antonio Conte’s strikers have forged a formidable partnership up front for the Nerazzurri this season, and the pair teamed up in devastating fashion 19 minutes in. Romelu Lukaku muscled his way down the byline before finding Lautaro Martinez, who smashed home to put the visitors in front. 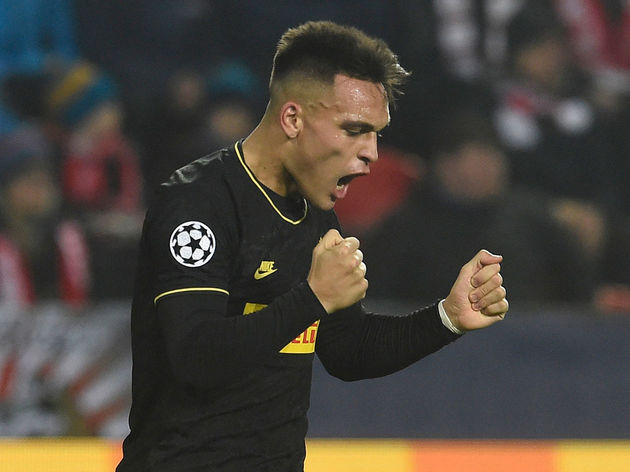 ?Lukaku thought he had doubled Inter’s lead when he capitalised on a dreadful error in the Slavia defence, before VAR overturned the decision and awarded the hosts a penalty for an earlier foul in an utterly remarkable turn of events. Tomas Soucek made no mistake from the spot, to hand Slavia a deserved equaliser.

The second half saw ?Inter twice strike the woodwork, with Lukaku heading against the post before Marcelo Brozovic struck the crossbar with a thunderous effort. It was Slavia’s turn to spurn a golden opportunity shortly after,

It was in fortuitous circumstances, but when Lukaku was presented with a similar chance, he made no mistake. A through ball from Valentino Lazaro looked like being collected easily by

The fact Conte’s side found themselves in front was fortunate enough, with the plucky hosts showing why they shouldn’t be underestimated, despite sitting rock bottom of Group F. Going forward there are few concerns over Inter’s ability, but their weakness lies in midfield, where time and time again Borja Valero and Matias Vecino were breezed past with worrying ease. The dynamic duo up top caused problems when they were given the chances, and only for an incredible VAR intervention the pair thought they had scored and assisted. The technology is there for a reason, but to see one side go 2-0 ahead only for a penalty to be awarded at the other end, you simply can’t write this level of entertainment.

Back to the football, I guess.

Consider the screw to have been then turned in the second half, with Conte clearly getting into his players during the break to remind them that victory is nigh-on essential if they are to reach the ?Champions League knockout stages. Twice they struck the upright, with Lukaku’s header an opportunity you would have put your house on him netting.

He wasn’t to be denied again, however, when a desperately unfortunate slip presented the Belgian with a clean run at goal which he finished with aplomb. Martinez finished the job with equal devastation as the formidable attacking duo did the business once more. Showing he isn’t past his best just yet, Diego Godin was the most solid defender on the pitch and bullied the Slavia forwards every time they came within touching distance of the centre half.

Lining up on the right hand side of a back three, he showed that age is just a number, with some crucial headers and blocks against the relentless energy of the Czech side.

Godin our best defender today, y’all hate to see it

League duty beckons for Slavia Prague next, as they are back in the Czech capital as they host Karvina on Sunday.

For Inter, they will return to Serie A when they take on SPAL at San Siro on Sunday afternoon.