?Here we go, people, the witching hour in the Champions League group stages is upon us.

With one game remaining, there’s still plenty to play for across all the groups. Whether it be for a qualifying place, to top the group or secure a Europa League berth, every single game (apart from the odd anomaly) on Tuesday and Wednesday has something riding on it.

So, without further ado, let’s take a look at the permutations ahead of the final round of fixtures this week. OK, we’re not off to a great start in terms of drama with Paris Saint-Germain and Real Madrid already securing their places in next year’s knockouts.

PSG’s come-from-behind draw at the Bernabeu on matchday five ensured that they finished as group winners, with Los Blancos forced to settle for second.

In terms of who finishes third, Club Brugge are in pole position. The Belgian outfit host Real with a one-point advantage over Galatasaray, who travel to the Parc des Princes to take on PSG.

Faith Terim’s side will have to better Brugge’s result against Real if they want to qualify for the round of 32 in Europe’s inferior competition. Bayern (1st) and Spurs (2nd) will go through to the last 16 ahead of their clash at the Allianz Arena on Wednesday night, with both sides likely to field second-string lineups in a bid to ensure they’re well prepared for their domestic clashes on the weekend.

But, there is something riding on the other game in Group B with Olympiacos needing to beat Red Star Belgrade in Greece if they want to finish third in the standings. Tune in if you’re interested in seeing how that one unfolds! 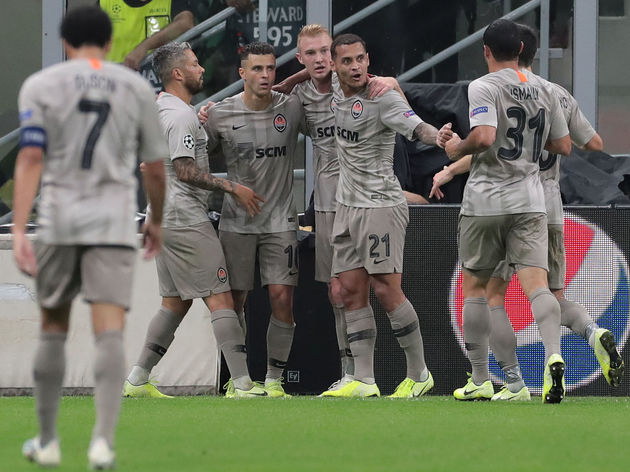 Right, here we go, some drama.

While Manchester City have assured top spot, second is all to play for with the remaining three teams all vying for the other qualification place.

Shakhtar – who are second heading into the final matchday after their 1-1 draw at the Etihad last time out – will go through if they beat Atalanta at home, or if they draw and Dinamo Zagreb fail to beat City in Zagreb. Atalanta have to beat Shakhtar in their own backyard if they stand any chance of qualifying and also need Pep Guardiola’s side to get at least a point in Zagreb.

If Dinamo overcome what will likely be a weakened City side and Shakhtar fail to beat Atalanta, then the Croatian champions will be in the hat for the last 16. Wednesday’s fixtures come to an end with one spot up for grabs in Group D. Tuesday’s fixtures is where it gets really, really bloody good, starting with Group E.

Napoli’s draw at Anfield last time out means there’s still everything to play for between three sides. Liverpool, who travel to RB Salzburg, currently sit atop of the pile and will qualify as group winner with a victory, or if Napoli fail to beat Genk.

The Naples-based outfit will go through with a draw or more against the Belgian’s, or if Salzburg fail to beat Liverpool. A win for Carlo Ancelotti’s men and just a point for the Reds will see Napoli steal top spot, with Jurgen Klopp’s side in second. The other qualifying spot will be awarded to either Dortmund or Inter. Antonio Conte’s side

Dortmund, who host Slavia Praha, must pick up more points than Inter to finish second. Simple. Strap yourselves in, people, it’s about to get wild in Group’s G and H.

Group leaders RB Leipzig are through and will clinch first place with a draw in Lyon on Tuesday night.

Zenit will go through if they beat Benfica and Lyon do not beat Leipzig, or if both games are drawn due to their head-to-head superiority over Lyon. A defeat for Lyon will see Zenit automatically through.

The French side will reach the knockout stages if they beat Leipzig (when they would also clinch first place), or if they draw and Zenit lose to Benfica.

Benfica, however, are unable to finish in the top two. They’ll finish third if they beat Zenit by a scoreline better than 3-1 and Lyon don’t lose, or if they win and Lyon lose to Leipzig.