Looking back into the past can be a lovely thing: Iconic albums, genre-defining films,

Also, it can be harrowing. I speak from experience here, as a man who thought, for much of his late teens, it was perfectly acceptable to wear a trilby – like a deli counter Pete Doherty – around a small Scottish seaside town without suffering severe repercussions.

Yes, nostalgia can be fun, but it’s always there to haunt us with ghosts from the past when we least expect it.

Alongside from a stunning array of ‘Cats Doing Hilarious Things LOL’ video compilations, the internet has also blessed us with

So, here’s 11 managers in some truly extraordinary snaps from back in their prime…

My goodness me! where to start with this absolute beauty?

Kicking us off, it’s Eddie Howe looking even more cherubic than usual. The now-Bournemouth manager rocked a sensational pair of curtains back in his playing days, which could have seen him slot into boybands as high profile as 911 or BBMak.

The sharp-eyed among you might well have also noticed the giraffe lurking in the background.

Interestingly, Peter Crouch left Portsmouth at around the same time Eddie Howe joined in 2002, so that’s presumably the towering striker lurking in the shadows.

??Straight in at number two, it’s an absolute belter of Mick McCarthy picking up Manchester City’s Player of the Year trophy back in 1983.

A real fashion icon of his times, McCarthy sports a sumptuous sleeveless lemon v-neck (with matching tie), alongside a smart pair of cream trousers, quite frankly putting the gentleman beside him to shame.

And what about that thick and luscious moustache, eh? Yes, I think we can all agree, 1980s McCarthy is far superior to the

Good grief! Someone give that man a vitamin C packed smoothie, and put a warm jacket around his shoulders!

The pasty-faced young chap before you is none other than David Moyes back in his playing days, looking like Mick Hucknall, if he was cast in Trainspotting.

The former ?Everton and ?Manchester United (remember that?) boss had quite the playing career, you know, enjoying spells with the likes of Celtic, Bristol City and Preston North End.

Former England manager Roy Hodgson here, looking like a Coronation Street stalwart wth a lovely new set of rollers back in his prime.

Lock up your daughters! 1970s Martin O’Neill is ready to charm and dazzle with a haircut I don’t quite know the technical name for.

??Free of the spectacles that give him a rather bookish demeanour these days, O’Neill’s piercing stare is one that means business.

The very same year this photo was taken, Nottingham Forest (the club he now manages) won a league and cup double. Lovely stuff!

Here is his right at the beginning of his career, wearing a delicious Gillingham top that doesn’t at all clash with those luscious, fiery locks.

The now-Sheffield Wednesday manager won a mighty three Premier League titles with Manchester United in the 1990s, and was a ferocious defender in his day.

I think I speak for all neutrals when I say this: Jürgs, forget all that nonsense about winning ?Liverpool their first ever ?Premier League title – just focus on growing back that splendid moustache.??

These days Jürgen Klopp looks quite the snappy character with his thick rimmed spectacles and baseball cap, but back in his days at Mainz, the charismatic German let his hair grow cascade down his forehead like a glorious lion’s mane.

There’s so many astonishing tales of Louis van Gaal’s exploits both as a player and a manager it’s hard to separate fact from fiction at times, but there’s no denying he was quite the fashionista back in the day. 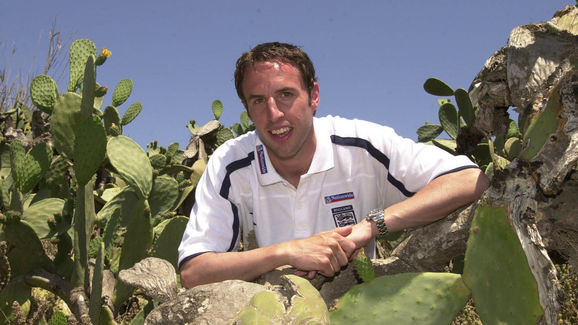 Let’s round things off nicely here, with an extraordinary photograph of now-England manager Gareth Southgate, posing uncomfortably in a bed of thriving cacti.

Was it a punishment for that Euro ’96 penalty shoot-out miss, or merely training for a future career of dealing with – ahem – prickly individuals at the FA?

We may never know…