Antonio Conte tasted victory in his first Milan derby, as Inter ran out 2-0 winners in a pulsating battle between the city rivals.

A fast-paced first 45 minutes saw Inter have the better of the chances, but Milan goalkeeper Gianluigi Donnarumma made three excellent saves to keep I Nerazzurri at bay. There was plenty of anticipation and excitement over the arrival of new Milan manager Marco Giampaolo, but that positivity has quickly turned into cynicism and impatience.

Despite holding onto their star players, and recruiting some high profile attacking talent such as Rafael Leao, Giampaolo seems unable to get a tune out of his side. ?Milan looked toothless throughout the derby, and it was difficult to see where the goals would come from. I Rossoneri have made a sluggish start to the new campaign, and have even played out entire halves without managing a single shot on target.

If Giampaolo is to imprint his style on this team, he’ll need results first to buy himself the time to do so.

STAR MAN – Gianluigi Donnarumma was a very busy man during this breathless Milan derby, and the young goalkeeper rose to the challenge brilliantly. The 20-year-old made a string of superb first-half saves, keeping Inter at bay when goals seemed inevitable.

The Italian international prevented ?Lukaku with a low stop, then pulled out two incredible stretching saves when it seemed easier for the Inter forwards to score. He was eventually beaten in the second half, but could do little about either goal.

A performance to be proud of from Donnarumma.

Inter dominated the derby from start to finish, but Conte’s men were struggling to make their breakthrough against a stubborn Milan. The decisive goal did come early in the second half, but their joy was almost snatched away from them by the assistant referee. Brozovic’s shot took a huge deflection on its way to goal, and poacher Lautaro Martinez waved a leg in the ball’s direction as it rolled across the six-yard box. It nestled in the back of the net, but the assistant referee decided that Martinez’s attempted interference was enough to distract a stricken Donnarumma and disallowed the goal.

Conte and the whole Inter side were up in arms, and after reviewing the images, the referee agreed with the away side and overruled his assistant’s decision.

VAR does have its uses after all…

STAR MAN – What a shrewd signing this man is proving to be. It never seemed in doubt, but Diego Godin has brought to Inter the experience and winning mentality that made the Uruguayan such a success in Madrid for all those years. 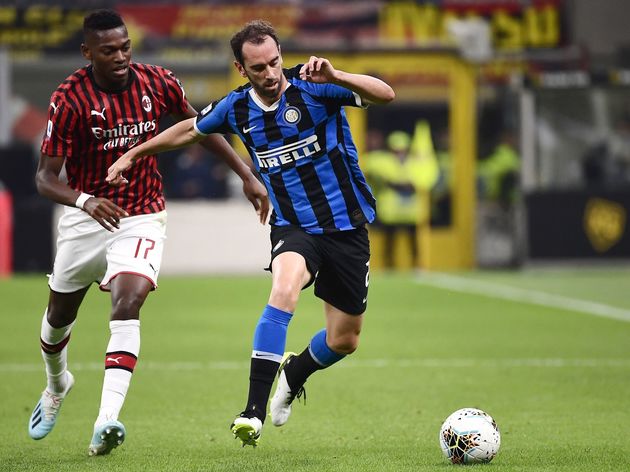 Godin marshalled the defence expertly and despite marking the pacy Leao, the ?ex-Atletico Madrid centre-back relied on his defensive awareness and positioning to nullify any attacking threat from the Milan left-hand side.

Conte is desperate for instant domestic success at his new club, and in Godin, the Italian boss has the perfect soldier to follow his orders on the pitch.

Giampaolo will be disappointed by the lack of cutting edge his side showed during this dramatic derby, and the ex-Sampdoria boss will be hoping for three points when Milan travel to Torino on Thursday evening.

Conte’s side were excellent during Saturday’s derby, and he’ll be hoping Inter are equally as impressive when they host fellow Champions League hopefuls Lazio on Wednesday night.