This summer’s transfer window saw ?a flurry of players make the move from England to Italy, as Serie A welcomed a whole host of new and exciting faces to their shores. This well-trodden path has proven successful for many, the likes of Edin Dzeko and excelling We’ve decided to rank ?the top ten new arrivals on how successful (or not) we think they’ll be for their new sides.

Okaka is a hard-working, powerful striker who provides a chaotic, physical presence ?whenever he plays. Unfortunately, he just doesn’t score a lot of goals. That’s kind of a problem, especially when its your primary job. Okaka certainly didn’t set the Premier League alight whilst at ?Watford, and the possibility of the Italian forward taking Serie A by storm is slim-to-none.

It’s a no from me, Stefano.

?The first of four Manchester United players to appear in this prestigious list, Matteo Darmian is the worst signing between him and his ex-teammates. Congrats Matteo!

The 29-year-old arrived in Manchester in 2015 with high hopes of nailing down a regular full-back spot at Old Trafford, but his performances were often far from convincing. After four years Darmian has finally returned to Italy and joined Parma, hoping to breathe life into his stuttering career. However, 60 league appearances in four years suggests the former Torino man will need a serious adjustment period to get back up to speed, and I Crociati are already well-equipped at the back.

It might be another season of struggle for Darmian.

?It’s hard to judge this move fairly, knowing an exciting and talented full-back in Joao Cancelo has gone to ?Manchester City as part of the deal. It seems a peculiar decision by I Bianconeri to let Cancelo leave, but Danilo is an adequate replacement for the Portuguese starlet. Over the season, there’s no doubt that the Brazilian defender will do a stellar job at the back for Maurizio Sarri’s side, but against a higher quality of opposition, particularly in the Champions League, the former Citizen will be found wanting.

Not ?Juve’s best piece of business.

Chris Smalling is in at number seven, and not number ten. I know what you’re thinking. I’ve absolutely ?lost the plot. I can confirm I am still sane, for the time being. The fact is, Chris Smalling is not a completely terrible defender.

He has his moments of comical stupidity, but there are worse centre-backs out there, even at? Man Utd Roma desperately required a defender to add some experience and competition to their limited options, and Smalling fits the bill nicely. Roma boss Paulo Fonseca likes his backline to press and win the ball high up the pitch, and the England international is at his best when defending aggressively on the front foot.

His Serie A career won’t be without its errors, but he may avoid his own comedy reel in the red and yellow of Roma.

A lovely bit of business, this. Davide Zappacosta struggled to anchor down a starting role during his time at ?Chelsea, and suffered without a string of consecutive matches to find his best form.

Roma are crying out for a proper full-back who can bomb up and down the touchline, whilst also having excellent defensive ability and awareness (sorry Alessandro Florenzi, you’re not the one for me). Zappacosta will slot straight into I Giallorossi’s backline and provide some much-needed defensive stability, whilst also whipping in some dangerous crosses for the forwards to put away.

Time for Zappa to show why he Costa fortune back in 2017.

?Sassuolo are a team on the up, and with Roberto De Zerbi at the helm, they possess an exciting young manager with creative ideas who can propel his side up the table. I Neroverdi lost their talismanic midfielder Stefano Sensi to Inter this summer, but Obiang was brought in from ?West Ham to fill the Italian youngster’s boots. Obiang is more defensively-minded than his predecessor, but he will provide a powerful shield for his backline, whilst releasing the likes of Manuel Locatelli to express themselves in the opponents’ final third.

Although he may not be the flashiest of signings, he’ll certainly be an effective purchase for Sassuolo this season.

?Who doesn’t love Fernando Llorente? Maybe some Man City fans I guess. The Spaniard proved to be an excellent battering ram for ?Tottenham last season, coming on late in the game to disrupt defences and to be a general pain in the backside. Eventually, Spurs’ Champions League run came to a heartbreaking end, but Llorente leaves the Tottenham Hotspur stadium as a hero. He’ll probably do the exact same thing at ?Napoli, too.

Losing a game with 15 minutes to go against a team defending deep in their own penalty area? Bring on the big man, and let chaos ensue.

Form is temporary, the ability to smash a centre-back to the floor with a flying limb is permanent.

?Everything about this move screams ‘Sanchez reborn’. Antonio Conte has taken a punt with his transfers this summer, and ?Alexis Sanchez is without doubt the biggest risk of them all. The Chilean forward has suffered a wretched spell at Man Utd, and he’s looked terribly off the pace for some time. His miserable 18 month period in Solskjaer’s side appears to be over, with critics suggesting he’s simply not got it in him anymore. For me, that’s not the case.

It may take some time for Sanchez to get back up to speed, but a move to Inter was the perfect catalyst to kickstart the struggling frontman’s flat-lining career.

That’s right, Lukaku is in at number two. Man Utd fans celebrated his departure, laughing at his awful touch, his clumsy nature and the fact he’d appeared to have gained a few pounds. But they won’t be laughing for much longer.

?Lukaku is a perfect fit for Serie A, and particularly for Conte’s Inter. The Italian boss has long desired to partner up with the big Belgian, and now it’s their chance to wreak havoc in the Italian top-flight together. One thing is for sure, Lukaku knows where the goal is. He’s a natural-born finisher who fell on hard times in Manchester, which appears to be a running theme for most stars who end up under the Old Trafford lights.

The 26-year-old would take great pleasure in proving everyone in England wrong, especially Solskjaer. And I think he’ll do just that.

A shock in at number one! ?Arsenal fans may have been glad to see the back of ?Henrikh Mkhitaryan after he failed to live up to the hype at the Emirates stadium, but Roma have definitely snatched a gem of a player. 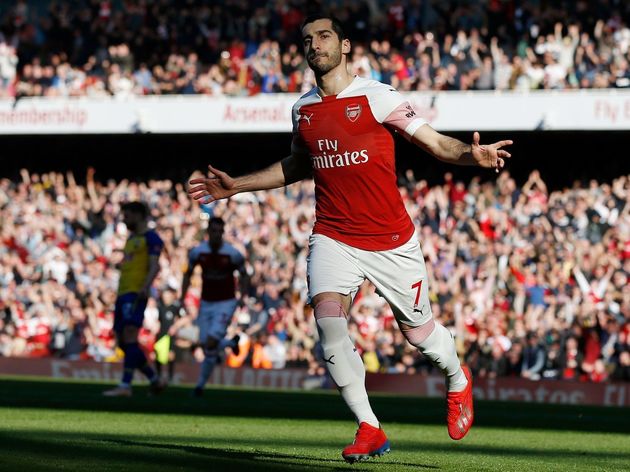 The Gunners’ squad is extremely top-heavy, littered with stars of a much similar pedigree to that of Mkhi. The Armenian forward struggled to make the desired impact during his time in the Premier League, but he’s undoubtedly got bags of talent and is just waiting for the right home to express himself to his devastating best.

I Giallorossi are playing a new brand of attacking, dynamic football under Fonseca, and Mkhitaryan can shine in a team that plays for him and gives him the right service.