The Uruguay star has been an iconic presence at the back for Atletico under Diego Simeone, having made over 250 appearances for the La Liga side since joining from league rivals Villareal in 2010.

However, the ?Atletico captain will see his deal at the Wanda Metropolitano expire in June, with the defender now 32. According to ?Sky Sports in Italy, Godin has provisionally agreed to complete a free transfer to Serie A giants ?Inter in the summer.

Spanish outlet ?AS further elaborates that although nothing has been officially signed in terms of contracts, Godin has said ‘yes’ to a move to San Siro. It is said that the Uruguayan will pen a two-year deal, with the option of a third year.

It is suggested that Inter are just ‘one step away’ from completing the deal, with both clubs said to be ‘working to finalise the last fringes’ of the agreement on a free transfer in June.

Diego #Godin is in advanced talks to join #Inter on next June as free agent. His contract with Atlético Madrid will expire and he can sign until 2021 as new Inter player. Talks ongoing. ??? #transfers #Uruguay #Atleti #Inter

The deal, which will be the first conducted by new Inter CEO Giuseppe Marotta, will become official once the defender has undergone a medical with the Italian side which is set to be scheduled for the coming weeks.

However, the report from AS stresses that nothing has been officially signed as yet, with no pre-contract agreement having yet been formalised, though it is expected that a deal will be done as Inter’s interest is ‘real and very strong.’

Godin famously scored the decisive goal in Atletico’s 1-1 draw with ?Barcelona to seal the La Liga title for the Madrid-based side at the end of the 2013/14 season. 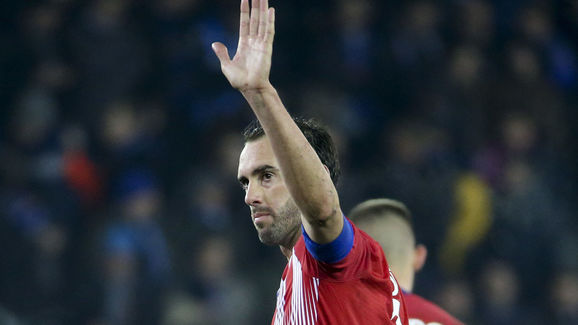 Should the Uruguayan complete a move to Inter in the summer, he would join an already impressive set of central defenders at the San Siro which features Milan Skriniar, Stefan de Vrij and Brazilian star Miranda, who also joined the Italians from Atletico in 2015.