Barcelona took their time to get going and lacked their usual fluid tempo of passing early on, but showed glimpses of brilliance in the absence of Messi, with the front three of Suárez, Rafinha and Coutinho combining well.

It was evident in the goal as Rafinha exchanged passes with Suárez, whose pin-point cross was guided home by the former – who spent half a season on-loan at Inter last season – after Coutinho took a couple of defenders away.

Barcelona looked a threat from set pieces with Clément Lenglet making his presence known. He had a first-half header saved well by Handanovi? and then saw another effort denied by the Inter keeper just after the hour mark. STAR MAN – Rafinha may have been the surprise inclusion to deputise in Messi’s absence and found the net, but Arthur was terrific. The summer signing played simple passes and did it well, keeping possession under pressure on several occasions and not panicking, showing similarities to Xavi.

He turned out of tight spaces, nutmegged a few players and, alongside Sergio Busquets, was a composed head in the heart of a midfield which controlled the game. 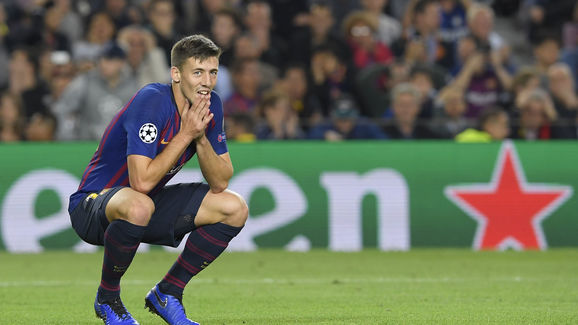 WORST PLAYER – Barcelona didn’t have a bad player on the pitch tonight, but Gerard Piqué was certainly anonymous. He didn’t have to do much in the way of defending against Inter, as the Italians didn’t create many opportunities.

The Italians asserted themselves from the first whistle, pressing their opponents high up the pitch to prevent Barcelona from playing the ball out from the back, which caused the Catalans a few problems in the first half and most of the time, they were forced to kick the ball long.

The Nerazzurri had to soak up most of the pressure and were quite careless in possession, making sloppy passes on several occasions throughout the first-half. They had to be patient and bide their time to find the right moment to counter, which almost came when Icardi helped a

Matteo Politano replaced the spectator-like Antonio Candreva during the interval and his introduction saw an immediate transition in Inter’s attack. They were passing the ball with more conviction and intent, producing some dangerous crosses and attempting efforts at goal, which occurred more often than in the first period.

The Serie A outfit lacked the cutting edge up front and left Icardi isolated on many occasions. He was deprived of service all night and he was left fending for himself against two experienced defenders on his return to the Camp Nou. His side were disappointing and couldn’t cope with the tempo of their opponents, who found their rhythm in the latter stages at the expense of Inter, and added a second to wrap up the victory.

STAR MAN – Politano made a visible impact when he came on. He ensured Inter passed the ball more quickly and sent several dangerous deliveries into the area, including one that Marc-André ter Stegen was forced to palm behind. He also had a shot on goal which, despite missing the target, demonstrated his confidence.

Well deserved loss for Inter against Barca. The team showed they can disturb Barca when they get their stuff together. I feel like De Vrij and Politano should’ve played from start

WORST PLAYER – Antonio Candreva was substituted during the interval. He didn’t offer much to Inter in the first period, which was unusual considering his pace and fine crossing ability, which he failed to demonstrate. An attempt to dribble the ball that went out of play summed up his performance on the night.

Up next for Barcelona is their first Clasico of the season against Real Madrid, a game which could decide the fate of Real manager Julen Lopetegui.

As for Inter, they face a tough league trip to the capital to play fourth placed Lazio, who sit behind the Nerazzurri by a point.