Antonio Conte made it two wins from two at Inter with a solid, but not entirely satisfactory win away at Cagliari. Cagliari would have felt a little hard done by not to get anything from this match. Rolando Maran’s side worked their socks off throughout the match and thoroughly deserved the equaliser they got early in the second half.

It was a good team performance from the Sardinians, but Radja Nainggolan, Joao Pedro and Nahitan Nandez played particularly well and their overall performance should keep the Cagliari fans optimistic.

On a contrasting note, the racist chanting directed towards ?Romelu Lukaku is the latest incident in a pattern of behaviour from Cagliari fans. One can only hope that the Italian FA gives them an appropriate punishment this time.

A few months after Serie A opted not to punish Cagliari for their fans’ racist abuse of Moise Kean they’re doing it again with Romelu Lukaku. The sounds coming from that stadium are disgusting. Cagliari shouldn’t have any fans in there again this season.

STAR MAN: Nahitan Nandez appears to have adapted well to Italian football since his

It wasn’t a brilliant performance from the ?Nerazzurri, but they’ll be happy with the victory all the same. An unbeaten start to the season will put a smile on the faces of Inter fans going into the international break. 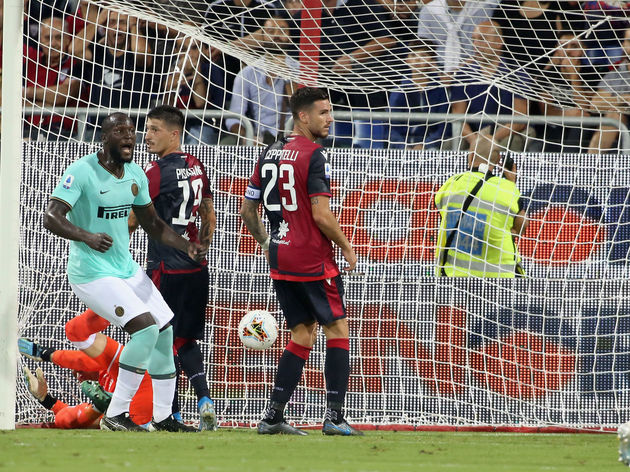 STAR MAN: What a start he’s had to his Inter career. Two goals from two games will surely silence the last of his critics. His penalty, which proved decisive, was taken in a cool fashion amid disgraceful abuse from the Cagliari fans.

Beautiful beautiful 3 points. Difficult game as I expected, but impressed by the players mentality. That’s the Conte effect ??? 6/6 points going into the international break, Lukaku with a goal in both games

Lukaku scores a penalty. Two goals in two for Inter. As inevitable as Thanos.

Antonio Conte will be pleased with two wins from two and should give his Inter side a great amount of confidence ahead of the international break. Their schedule gets significantly more packed after the break, and they’ll be hoping to continue this form as the fixtures begin to pile up.

Cagliari, on the other hand, can take pride from their performance but will be conscious that they must begin to get points on the board if they are to have a successful campaign.

More importantly, they and the Italian authorities must investigate the sections of fans involved in the abuse of Lukaku.