Inter were left to pay for an extremely disappointing performance on Friday night, slipping to a 2-1 defeat to Cagliari in Serie A.

Despite lying just six points above the relegation zone, it was Cagliari who dominated the opening exchanges against their more illustrious opponents. After creating numerous chances, I Rossoblu got their deserved opening goal on the half hour mark, as club captain Luca Ceppitelli planted a towering header past Samir Handanovic in the Inter goal. 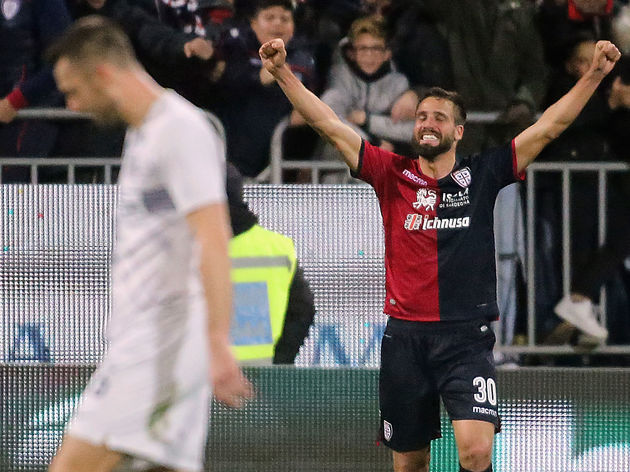 Cagliari’s joy was short-lived however, as Radja Nainggolan’s cross was met by a stooping header from Lautaro Martinez to equalise for the Nerazzurri just seven minutes later. But with just minutes to go before half-time, Leonardo Pavoletti struck a sweet first-time volley into the near post to hand the initiative back to Cagliari.

The hosts saw the game out for victory, with Inter now anxiously watching over their shoulders as rivals Milan look to leapfrog them in Serie A when they take on Sassuolo on Saturday.

With the debacle over ?Mauro Icardi’s future at the club overshadowing events at the Nerazzurri, Luciano Spalletti’s side came into Friday night’s game desperate for a bit of respite. But if the side’s Italian manager was hoping for a rallying performance from his players, then he certainly didn’t get it in the first half. ?Inter looked lacklustre and defensively fragile, and could arguably consider themselves extremely lucky to be trailing by just the one goal at the break.
The expected onslaught from the visitors failed to materialise after the interval, with the Nerazzurri looking worryingly toothless in attack. Whilst Icardi’s replacement Lautaro Martinez certainly gave it his all, Inter’s two wingers ?Ivan Perisic and Matteo Politano were abysmal.

The duo were out-muscled, out-worked and failed to offer any meaningful threat from out wide. The defeat now means city rivals Milan can now overtake them with a victory against Sassuolo at San Siro on Saturday.

Nainggolan re-gaining form is great to see. At his best he really is a complete midfielder. Ability to drive at defence makes them apprehensive to press and leave space, therefore he gets more time on the ball to find a pass, allows he to exceed creative expectation.

Having fallen to an embarrassing defeat to Cagliari in ?Serie A, Spalletti’s men travel to Germany on Thursday to take on Eintracht Frankfurt in the first leg of their Europa League last 16 clash.