A stunning late goal from 19-year-old substitute Nico gave Barcelona three precious points as they beat Elche 3-2 at the Nou Camp in La Liga on Saturday.

After two league games without a win and a humiliating 3-0 loss to Bayern that knocked them out of the Champions League in the group stage for the first time in almost two decades, Barca’s coach Xavi Hernandez was desperate for a win to take some of the pressure off his player’s shoulders.

Xavi’s bet on his younger players appeared to pay off as Spanish youngsters Ferran Junglat and Gavi both scored early on to give Barca a 2-0 lead.

But in the second half, Elche scored twice in two minutes through Tete Morente and Pere Milla.

Nico’s superb strike in the 85th minute saved the day, however, helping Barca climb one spot in the standings to seventh, two points off the European qualifying places but still 15 points behind league leaders Real Madrid.

Meanwhile, a Lucas Ocampos strike in the final minutes of the match gave second-placed Sevilla a 2-1 win over Atletico Madrid.

In a feisty match between two sides that are trying to stay in contention with league leaders Real Madrid, Sevilla came out on top.

They now have 37 points, putting them five behind Real, while Atleti fall to fifth place on 29 points, leapfrogged by surprise team Rayo Vallecano, who beat Alaves 2-0 earlier in the day and remain unbeaten at home this season.

Ivan Rakitic gave Sevilla the lead early in the first half with a fabulous long-range strike that could be a contender for goal of the season.

Felipe equalised from a corner, timing his jump perfectly and thumping his header past Sevilla goalkeeper Bono.

But right before stoppage time, Ocampos reacted quickly to smash in a shot after a Thomas Delaney header came off the crossbar.

Tammy Abraham scored two goals as Roma put on a counter-attacking clinic to stun Atalanta with a 4-1 win and climb to fifth place in Serie A.

Jose Mourinho’s side finished the game with 29 per cent possession and eight shots to Atalanta’s 17, but they were far more efficient with their chances.

England striker Abraham scored inside the opening minute with a deflected strike, and Nicolo Zaniolo doubled Roma’s lead by finishing off a quick counter-attack for his first league goal of the season.

Gian Piero Gasperini was quick to make a change, bringing on Luis Muriel after 34 minutes, and the Colombia international’s strike cannoned off Roma’s Bryan Cristante for an own goal that got the hosts back into the match on the brink of half-time.

Atalanta pushed for a leveller and thought they had it when Jose Luis Palomino nodded in from close range at a corner, but he was offside.

Abraham swept in his second of the afternoon with eight minutes remaining to take his tally for the season to six goals in Serie A.

Goals from Alvaro Morata and Juan Cuadrado either side of half-time gave Juventus a 2-0 win at Bologna in thick fog to lift the Turin club to sixth place in Serie A.

Morata fired home a first-time finish after six minutes to put the visitors in front, but they were second best for much of the match as Bologna dictated the tempo.

Sinisa Mihajlovic’s side could not make their possession count, however, and Colombia defender Cuadrado punished them when his deflected strike flew into the top corner midway through the second half. 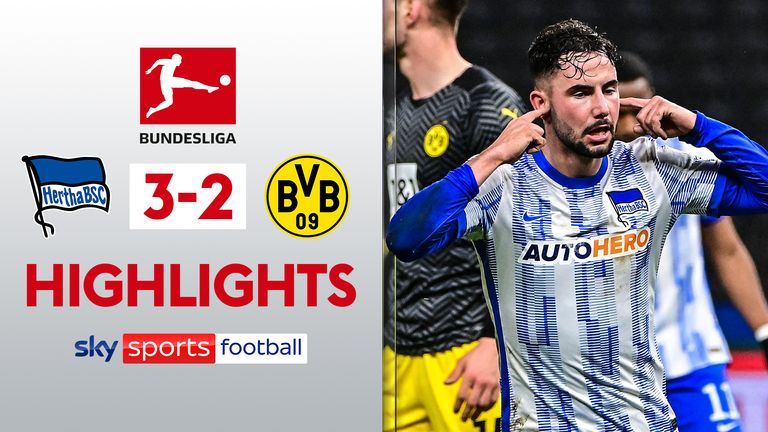 Highlights of the Bundesliga match between Hertha Berlin and Borussia Dortmund

Second-placed Borussia Dortmund slumped to a year-ending 3-2 defeat at Hertha Berlin on Saturday to go into the winter break nine points behind leaders Bayern Munich.

Hertha’s Marco Richter struck twice in the second half as Hertha came from a goal down to score three times against a makeshift Dortmund defence.

The visitors, looking to close the gap with Bayern following their 4-0 win over VfL Wolfsburg on Friday, enjoyed a strong start even though in-form Jude Bellingham was missing due to suspension, and central defender Mats Hummels and ‘keeper Gregor Kobel because of illness.

They could have scored with a string of good chances before Julian Brandt cleverly dinked the ball over keeper Alexander Schwolow to put the visitors in front in the 31st minute.

The hosts, however, equalised six minutes after half-time when Ishak Belfoldil slotted the ball under reserve ‘keeper Marwin Hitz.

Richter put Hertha 2-1 up in the 57th with an outstanding finish, placing the ball into the top far corner.

The 24-year-old forward then thundered home on the rebound in the 69th with the Dortmund defence in chaos after an error by Brandt on the edge of the box.

Dortmund are second on 34 points, with Bayern top on 43. Bayer Leverkusen, third on 28, are in action on Saturday against Freiburg. Hertha’s win moved them away from the relegation zone and into 11th place on 21 points.

RB Leipzig’s hopes of a fresh start under a new coach are fading after losing at home to 10-man Arminia Bielefeld 2-0.

Japanese midfielder Masaya Okugawa scored the second goal in the 75th minute, not long after Fabian Klos was sent off for a bad challenge on Leipzig defender Willi Orban.

Janni Serra put Bielefeld in front from a rebound, and Leipzig were unable to make their undoubted attacking prowess count, with Andre Silva, Angelino, Christopher Nkunku and Benjamin Henrichs all missing chances.

It was the first loss in three games for new Leipzig coach Domenico Tedesco, who took over after the club dismissed Jesse Marsch. It leaves Leipzig in ninth, far from the Champions League qualification places.

Hoffenheim defender Kevin Akpoguma scored in injury time to deny Borussia Monchengladbach their first win after a run of four defeats, drawing 1-1. Breel Embolo had the visitors on their way to victory, but they failed to stop Akpoguma equalising in the 91st minute.

A brilliant early goal from Max Kruse was enough for Union Berlin to finish the year on a high after winning 1-0 at Bochum. Kruse got married on Thursday and fired home the winner in the 16th minute when he met Grischa Promel’s lay-off with a half volley inside the top left corner.

Eintracht Frankfurt earned a 1-0 victory over visiting Mainz to make it three Bundesliga wins in a row as they climbed to fifth place before the start of the winter break.

Jesper Lindstrom slotted home the winner in the 35th minute, with the Dane scoring for the third consecutive match.