Inter have been knocked out of the Europa League following a 1-0 home defeat to Eintracht Frankfurt on Thursday night, with Luka Jovic’s goal settling the tie.

Following a draw in the first leg, this game sprung into life instantly as it was clear that Eintracht were not going to sit there and let Inter play, they were going to attack. And attack they did.

It wasn’t long before this reaped rewards as Jovic broke away from a despairing Stefan de Vrij, then deftly chipped the ball over Samir Handanovic into the Inter net. The Nerazzurri struggled to contain Frankfurt’s lively attacking player and were caught a number of times. As the first half went on, Inter began to dictate the play and tried to put the Frankfurt defence under some pressure, but their final balls were easy for

It was clear early on that Frankfurt were looking to hit Inter on the counter and attack with pace. They scored the opening goal this way and it looked to cause Inter’s defence numerous problems in the opening 20 minutes.

If it wasn’t for their goalkeeper and captain Samir Handanovic, Inter could have been looking at an embarrassing scoreline in the opening quarter of this match. It was one of Handanovic’s saves that stood out and stopped the game being put out of the Nerazzurri’s reach. 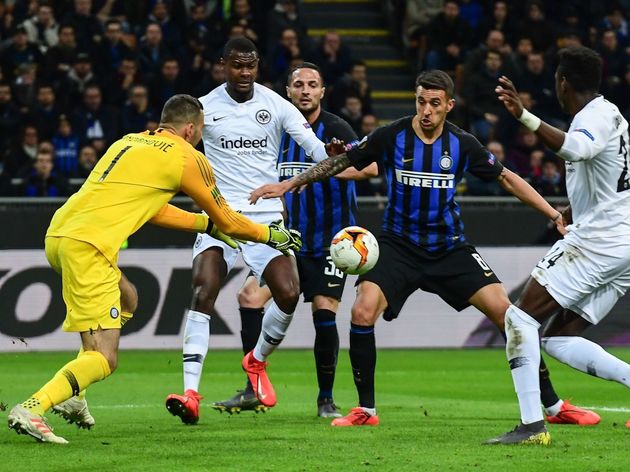 Inter were caught in possession and Frankfurt broke at speed and had a favourable three on two situation, which looked likely to result in a second away goal for the German side. Handanovic however, had other ideas and pulled off a fantastic save that allowed his defenders to clear their lines of the threat.

If Handanovic had been beaten, when a few of his defenders had been, Inter would have been dead and buried. Instead, it meant they had a chance to progress to the next stage and try to keep their Europa League dream alive.

Handanovic made a brilliant early save in the opening minutes, with luck going his way as the follow-up shot hit the crossbar.

He could have done more for Jovic’s strike but the experienced Slovenian will feel that centre-half Stefan de Vrij should have dealt with the young Serbian better, rather than being out-muscled off of the ball. 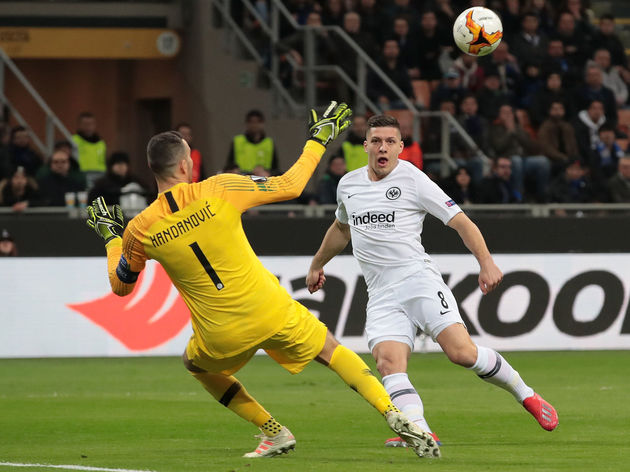 He again came to Inter’s rescue just before the 40 minute mark, as a quick Frankfurt counter left the home side’s defence scrambling to get back and it was the 34-year-old who provided the crucial block to stop the German side getting that all important second away goal. He delivered the goods yet again in injury time to deny both Jovic and Filip Kostic, keeping his side’s slim chances of qualification alive.

Handanovic was recently handed the captain’s armband by Luciano Spalletti and this was a captain’s performance, inspirational and calm under pressure. Inter will need that if they are to finish the season in a Champions League qualification spot. Yet those who have been watching the Bundesliga this season will know that Jovic has an eye for goal and will have known exactly what he wanted to do in that moment. He simply chipped the ball over the despairing Inter keeper and watched the ball bounce into the net, giving Frankfurt an important away goal.

Dutchman Jetro Willems was deployed in Frankfurt’s midfield rather than in his more customary left-back role. It has to be said that he did not look out of place playing in the holding midfield role for the German side.

He expertly broke up the play, putting in some important tackles at times when Inter were starting to look dangerous. His performance is typified by the fact it took the Nerazzurri 65 minutes to register a shot on target. Willems just wouldn’t let them through. 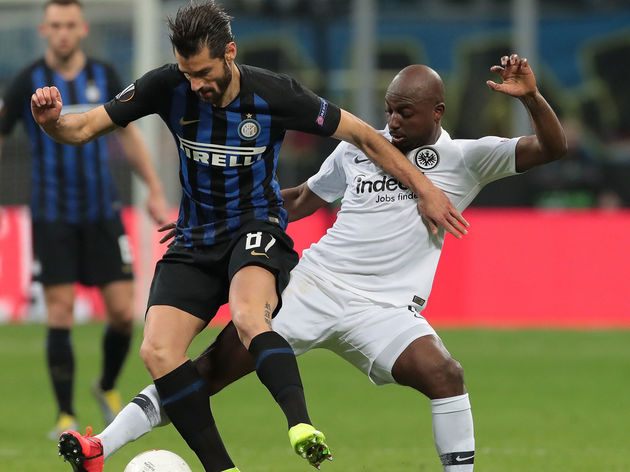 Not only did he stop attacks, but he started them too. When he won the ball back in the middle of the park, the 24-year-old looked to unleash the attacking power of his teammates and catch the Inter defence sleeping. On numerous occasions he fed balls to Jovic and Frankfurt’s other attacking players, causing Inter’s defence countless problems. It must have been a relief to the Nerazzurri when he was replaced in the 73rd minute.

Such was the quality of his performance, manager

?Inter go up against bitter city rivals Milan at the weekend, with third place up for grabs for the winner. Luciano Spalletti will be hoping to secure Champions League football next season, and to do that his side will have to do better than they did against Frankfurt. To add more to the affair, Milan boss Gennaro Gattuso has avoided a ban in the derby – so expect some fireworks.

Eintracht Frankfurt face bottom club Nurnberg in their next Bundesliga game. They will be looking to add to their already impressive goal tally and get the win as they too chase down a Champions League qualification place.