Cristiano Ronaldo’s 600th career club goal cancelled out a stunning opener from Inter’s Radja Nainggolan, to ensure the spoils were shared in the Derby d’Italia at San Siro on Saturday evening.

In an intense opening period, Inter’s early pressure told, as Nainggolan thundered in a ferocious volley from outside the area to give the home side the lead after just seven minutes. 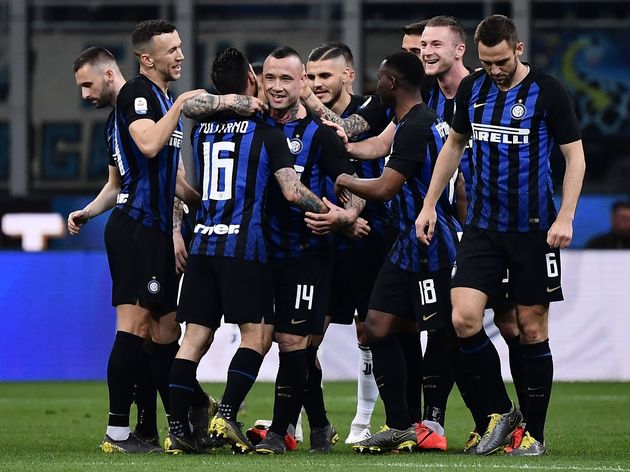 With Juventus struggling to assert themselves on the game, both Stefan de Vrij and Mauro Icardi missed great opportunities later in the first-half thanks to a combination of some profligate finishing and backs to the wall defending.

Their misses proved crucial as the Bianconeri began to turn up the pressure after the break, and equalised mid-way through the second-half thanks to Ronaldo, after the Portuguese star exchanged an exquisite one-two with Miralem Pjanic and fired home.

Both sides created their fair share of opportunities but failed to take advantage, and with things beginning to hot up in the race for the top four next year, Inter’s draw may just prove to haunt them come the end of the season.

Having seen AS Roma close the gap to just three points earlier on Saturday, the pressure was on Luciano Spalletti’s side to respond, and to pick up some kind of positive result against Juventus. And they made the best possible start when Radja Nainggolan rolled back the years to score a thumping volley inside ten minutes. The Belgian’s wonder strike was rich reward for an excellent ?Inter performance in the first-half, but saw their efforts go to waste when Ronaldo equalised for the visitors.

With a visit to ?Napoli still to come in their schedule, the race for the top four and a guaranteed place in the Champions League group stages next season is still very much on. With the draw, the Nerazzurri find themselves just six points clear of city rivals Milan, who have a game in hand, with the battle set to go right down to the wire.

STAR MAN – A display reminiscent of the time he was in his pomp at Roma, Radja Nainggolan was impressive from start to finish. The 30-year-old delivered an all-action performance for the Nerazzuri, often carrying the ball from deep inside his own half and well into the Juventus final third. The Belgian’s stunning volley after just seven minutes was typical Nainggolan; it had power, venom and sheer audacity.

??The deal to take the midfielder to the San Siro saw the highly-rated Nicolo Zaniolo go in the opposite direction, and was widely regarded as a really errant piece of business from Inter based on both their trajectories this season. But if Nainggolan can produce more consistent performances like he did on Saturday, then Inter will certainly have a genuinely world-class operator on their hands.

Recently crowned champions of ?Serie A for an eight successive season, it was little surprise to see Massimiliano Allegri’s men look well short of the required pace. The Bianconeri have nothing of note to play for this season having already exited the Champions League to Ajax this month, and on Saturday evening against Inter, they struggled to get going.

However, as is often the case, ?Cristiano Ronaldo (who else?) was on hand to rescue Juventus from a disappointing defeat against their rivals. Allegri’s side looked lethargic and devoid of any real ideas throughout the game but their Portuguese talisman dug them out of a hole once more. With the season winding to a close, it is imperative that Juventus seek to bring in new faces to aid Ronaldo’s quest of adding another Champions League medal to his collection next year.

STAR MAN – It may not have been the greatest of performances from either Juventus or Cristiano Ronaldo, but the five-time Ballon d’Or winner once again stepped up when needed, to ensure the Bianconeri avoided defeat to their bitter rivals. In scoring the equaliser, Ronaldo scored his 600th club goal of his career, and it came at a time when Inter were looking dangerous and increasingly likely of scoring a game-defining second. He may not have led the Old Lady to the holy grail of the Champions League this year, but there seems to be no stopping Ronaldo, even at the age of 34. With the Serie A crown already added to his bursting trophy cabinet, the former Real Madrid star will relish the prospect of firing Juventus to European glory next season.

Inter will look to maintain their grip on a place in the Champions League next season when they travel to Udinese next Saturday, whilst ?Juventus take on Torino in their penultimate home game of the season a day earlier.