Juventus laid a marker in the Serie A title race at San Siro with a 2-1 victory over Inter, the visiting side moving top of the table thanks to strikes from Paulo Dybala and Gonzalo Higuain.

However, substitute Higuain settled the contest in the 80th minute, finishing off a flowing move to send Juve above Inter by a point before the international break. 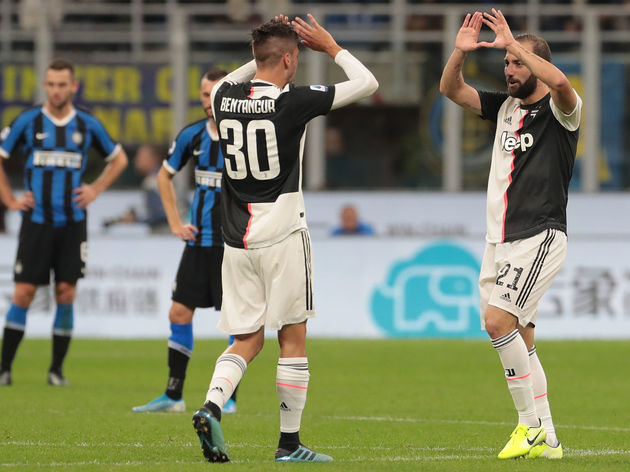 I Nerazzurri went into Sunday’s game as one of only two sides in Europe’s top five leagues to have won every game so far this season – Liverpool being the other team.

And while there’s a lot to be excited about in this Inter side, Sunday evening was more about Antonio Conte’s side establishing themselves as proper challengers to Juve after a few false dawns. They couldn’t quite do that on Sunday. However, their three centre backs stood up to the threat of Cristiano Ronaldo and Dybala well, even if the former remained incredibly influential throughout the game.

There are few weaknesses between Stefan de Vrij, Milan Skriniar and Diego Godin – who was later replaced by Italy Under-21 international Alessandro Bastoni – and that defensive trio should only get better as the season goes on.

??STAR PLAYER – Inter’s fans had a hate-hate relationship with Mauro Icardi before the Argentine departed on loan for Paris Saint-Germain, but in Lautaro Martinez it looks like they have the perfect replacement. The 22-year-old is an all-action kind of forward with quick feet, and he gave Juve’s centre backs a few torrid moments with some nifty movement in tight areas.

His goal count will likely be secondary to Romelu Lukaku’s this season, while Stefano Sensi remains a threat, but his movement and lightning pace will play a major role in Inter’s attack this term.

I’m a huge Lautaro Martinez fan- contributes when he doesn’t score and elevates his game on biggest stages. What a signing by Inter

Lautaro Martinez is class. So much better than iCardi B.

Whereas ?Inter were looking to show there’s a new player in town eyeing the Italian top flight title, ?Juventus evidently wanted to destroy any whiff of a challenge from Conte’s side.

The way they started, with a goal in the fourth minute, showed they mean business. The decision to start Paulo Dybala ahead of Gonzalo Higuain was vindicated alarmingly early, with Juve’s front three – bar Federico Bernardeschi, who had no impact during the game – supported well by the midfield trio of Blaise Matuidi, Miralem Pjanic and Sami Khedira.

That midfield has appeared stale in the past, while Aaron Ramsey has freshened things up during his first handful of games, but Pjanic showed he can provide killer passes with his ball to ?Dybala, while Matuidi and Khedira remain willing runners going forward.

Their depth is unmatched throughout Serie A, with Higuain coming off the bench to score the winner the perfect example, and this latest result shows they remain capable of visiting the tougher stadiums and winning.

STAR PLAYER – While Inter’s defenders fared reasonably well against Ronaldo during the bulk of the game, the Portugal international remained a threat and came alive in Juve’s attacking moments.

He was also heavily involved in Higuain’s winner, receiving the ball twice and passing to Rodrigo Bentancur in a sharp phase of play.

– Cristiano has been fire ? His best Juve game so far, just lacks a goal

– Dybala Ronaldo should always play together

– Proud of Juve for the way they’ve played ?

Although, it must be said, it wasn’t all love for the Juve striker…

I reckon that free kick he scored against Portsmouth was the last time Cristiano Ronaldo didn’t hit a free kick straight into the wall.

Following the international break, Inter visit Sassuolo in Serie A before hosting Borussia Dortmund in another crucial Champions League game.

Fresh from this win, Juventus will face Bologna before another home game, this time in Europe’s elite club competition when Lokomotiv Moscow visit Turin.