Inter secured qualification for next season’s Champions League with victory over Empoli thanks to goals from Keita Balde and Radja Nainggolan, relegating their opponents in the process.

Luciano Spalletti’s side huffed and puffed for the majority of the contest but pulled ahead thanks to substitute Balde’s brilliant strike six minutes after half-time.

The hosts had the chance to double their advantage when

That penalty miss came back to haunt Inter when the unmarked Salih Ucan’s low cross.

But Nainggolan was on hand to prod in after Matias Vecino struck the post to ease the tension at San Siro and secure another season of football in Europe’s elite club competition.

Inter headed into Sunday’s final round of Serie A fixtures as one of three teams looking to qualify for next season’s Champions League. Following a late surge, Atalanta were third ahead of the final games, with Inter fourth and Milan fifth.

Atalanta fell behind early to Sassuolo on while ?Milan surged into a two goal lead at SPAL. Unsurprisingly, San Siro was a stadium packed with nerves as Nerazzurri supporters watched their side fire shots at Empoli’s goal with no success in the opening half hour, 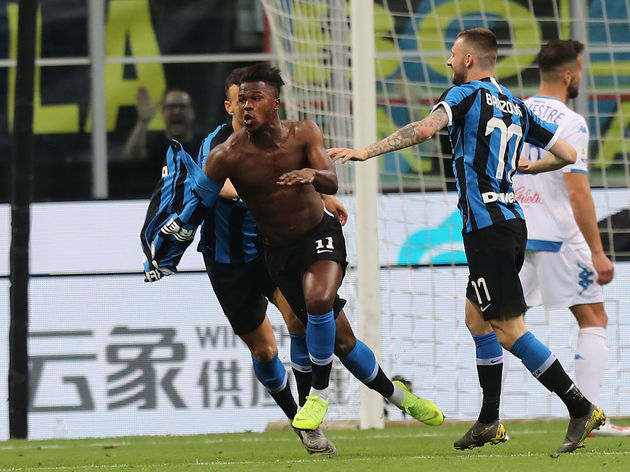 STAR MAN – Keita Balde gave Inter the injection of pace and flair on the ball when he was introduced after half-time and helped put Inter’s fans at ease momentarily with his great goal.

Oh my word….Icardi misses from 12 yards!

But we lead courtesy of Keita Balde’s cameo strike.

We shall be in the Champions League come what may.#InterEmpoli

Luciano Spalletti’s gets it absolutely right as his 2nd half sub Keita Balde scores for Inter!

INTER LEAD ITS KEITA BALDE!!! How important could that be at both ends of the table!!! (1-0)

With the Serie A season now finished and Champions League football to look forward to next term, Inter will look to rebuild over the summer, potentially with a new manager with Spalletti’s future still uncertain. Empoli will play in Serie B next season after Genoa managed to avoid defeat away at Fiorentina.