?Inter booked their place in the Coppa Italia semi-finals after they edged Fiorentina 2-1 at San  Siro on Wednesday night.

In a first half that severely lacked quality, Fiorentina were content and defended well in their deep 5-3-2 set-up but failed to offer a threat going forward – with Inter’s back three comfortably coping with La Viola’s often tame attacking transitions.

The Nerazzurri, however, were just as poor going forward. Despite enjoying much of the possession, Antonio Conte’s men struggled to sufficiently service the front two and, once again, they looked devoid of ideas in the final third – a deflected Alexis Sanchez header was the only half-decent chance the hosts could muster in the opening 40 minutes. But just as the two sides were edging towards a much-needed half-time break, Inter struck through Antonio Candreva – the ball falling rather fortuitously to the wing-back in the box after the Fiorentina backline failed to deal with the goalscorer’s errant pass into Lautaro Martinez.

The goal undoubtedly reinvigorated the hosts and they looked like a completely different side at the start of the second period, spurning a couple of good opportunities to double their lead.

Completely against the run of play, however, Fiorentina levelled as Martin Caceres met a corner from the right superbly – heading past a hapless Samir Handanovic.

The equaliser didn’t deter the hosts though, and almost immediately after Christian Eriksen was introduced for his Inter debut, they took the lead once more, this time through Nicolo Barella – who volleyed home expertly on the edge of the Fiorentina area.

Inter continued to probe for the remainder of the contest but failed to find a third, settling for a 2-1 victory and setting up a semi-final clash with Napoli.

Instead of their usual high-intensity start followed by a second-half collapse, Inter did the complete opposite in this one.

After an opening 45 minutes of unimaginative attacking play and overhit balls in behind La Viola’s backline, the Nerazzurri improved significantly in the second period – despite getting pegged back on the hour mark. 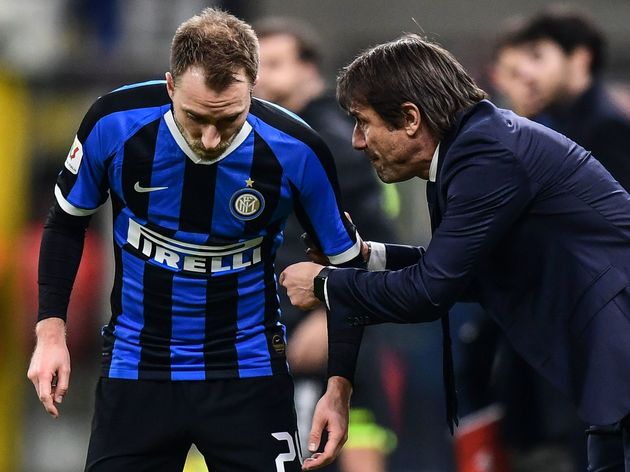 Passes started to find their intended destinations while they began to suffocate the visitors deep in their own half with a typical high Conte press – a ploy that helped them create chances at a regular rate.

The change in shape to a 3-4-1-2 certainly produced a mixed-bag but nevertheless, Conte will be looking to carry on the momentum from his side’s impressive second-half display into the trip to Udinese at the weekend.

Conte would’ve been thrilled to have seen Barella, one of Inter’s stars in the first half of the season, shine on Wednesday night.

The dynamic midfielder has struggled for form since his return from injury earlier this month, but he looked back to his best in this one – lining up in a midfield two on this occasion.

The Italy international was the only positive from a tepid first-half display by the home side – showing off his fine passing range as well as his ability to resist La Viola’s midfield press. He continued to dominate the middle of the park in the second period, helping Inter discover a newfound intensity out of possession.

It was a display that had a little bit of everything: flair, composure, maturity, tenacity and, of course, a fine goal.