?Inter captain Mauro Icardi has taken to Instagram to hit back at the club’s fans, following the cacophony of boos that followed their side’s 1-0 Seire A loss to Bologna on Sunday.

The San Siro sleeping giants’ loss saw them fail to capitalise on AC Milan and Roma’s subsequent draw, and Inter (who sit in third place) are now 20 points adrift of league leaders Juventus. I Nerazzurri are now without a win in four matches, and have scored just three goals in their last five Serie A outings. 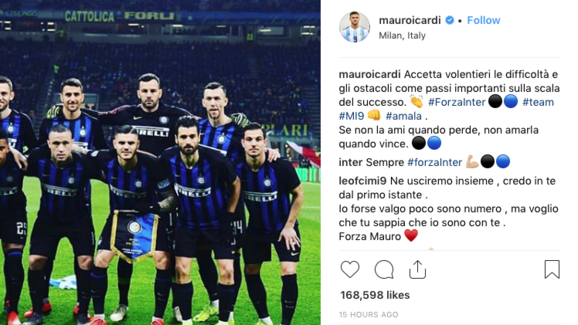 Posting on his ?official Instagram account after the match, Icardi appeared to take a pop at the Inter faithful, with his caption translating as: “

Icardi’s comments come at a time when his future with Inter is unclear, ?with a new contract extension yet to be agreed. Interest in the 25-year-old is likely to be high in the summer, with the likes of ?Real Madrid and Chelsea

The Argentina international has built up a prolific goal scoring record during his five-and-a-half seasons with Inter, netting 122 goals in 208 appearances. However, Icardi hasn’t scored a ?Serie A goal since the competition returned from its winter break, and could face further wrath from the fans should he fail to turn around his form in the coming weeks.

Meanwhile, ?Real Madrid are set to offer their star midfielder Luka Modri? a new contract, to ward off apparent interest from Inter. The Croatian icon still has one-and-a-half years left on his existing contract, but Los Blancos are believed to be keen for the former ?Tottenham Hotspur man to retire at the Bernabéu.