Despite scoring 22 goals in just 24 Serie A matches this campaign, Inter marksman Mauro Icardi believes that he can perform even better for both club and country.

The 25-year-old Argentinian told Inter TV that he “never stops learning” and that the penalty area “is my home”, ?amidst rumours circulating that clubs such as Real Madrid and Chelsea will compete for the signature of the striker this summer.

Speaking about his keen eye for goal, the Inter striker said: “The penalty area is the zone where I feel the happiest, as I am a striker and I need to score goals. That is my home. 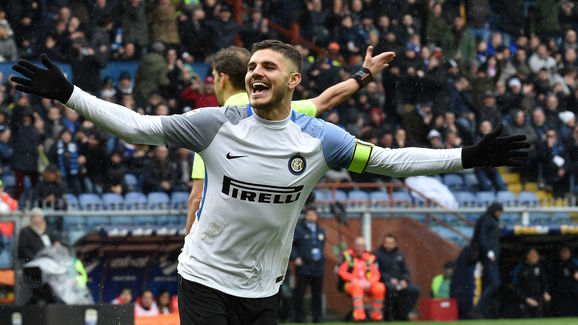 “The penalty is a big responsibility, because the whole team depends on my finish. I am accustomed to being under pressure, of looking at the goalkeeper… many things go through your mind at that moment.

“The good thing about me is that I am not affected by the atmosphere around me. That helps a huge amount. You study goalkeepers and I usually wait until the last moment, because if I get it a second wrong, I can miss.

“The penalty in the derby with Milan was a lot of responsibility, as in those moments there are so many people waiting for your goal and it was spectacular to win it with my hat-trick. That’s why I took off my jersey and showed it to the crowd, to get them all involved.” The ex-Sampdoria forward is speculated to usurp Juventus’ Gonzalo Higuain as one of Argentina’s main strikers in their World Cup squad.

While a string of impressive performances in Russia could see his value increase significantly, the Inter man mainly has his sights set on helping his national team to lift the World Cup trophy in the summer.

He added: “My dream is to score a goal in a Champions League or World Cup final, a game that is so important, it’ll remain in history. Having said that, I enjoy every goal, even one in a friendly.”