?Inter play host to Barcelona on Tuesday night aiming to qualify for the last 16 of the Champions League for the first time since the 2011/12 season, but knowing they most likely need to beat their Catalan visitors to do so.

Antonio Conte’s side need to match or better Borussia Dortmund’s result against Slavia Prague to progress, as the Italian giants have a superior head-to-head record over BVB. 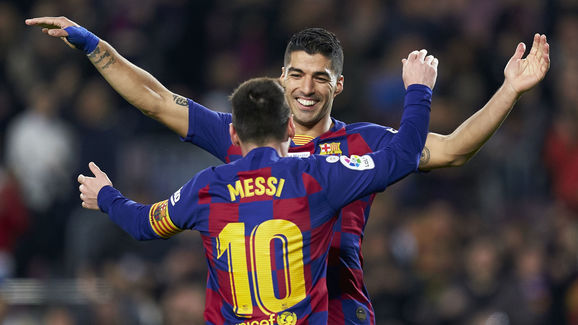 ?Inter are still without the trio of ?Alexis Sanchez, Stefano Sensi and Nicolo Barella, causing Conte some selection headaches. Tuesday’s hosts will be hoping that Antonio Candreva passes a late fitness test, while Kwadwo Asamoah is available after returning from injury against Roma.? ?Barcelona also have a number of key players sidelined, most notably Jordi Alba, ?Ousmane Dembele and Arthur, while Valverde has ?opted to rest Lionel Messi and Sergi Roberto.

This will be the tenth clash between these two sides, Barcelona having won five to Inter’s one, and three draws between the pair. A ?Luis Suarez-inspired Barca came out on top in the reverse fixture at Camp Nou, despite Inter playing very well for large periods during that 2-1 loss.

Despite a disappointing goalless draw with Roma last weekend, Inter still lead the ?Serie A title race thanks to Juventus’ 3-1 defeat to Lazio. The Nerazzurri have won eight of their last 11 matches in all competitions and are two points clear of the Old Lady in the Italian top tier.

The form of Inter’s strike partnership is also noteworthy, with Lautaro Martinez and ?Romelu Lukaku having scored 24 goals between them in Serie A and the Champions League this campaign. Despite consistent criticism this season, Barcelona are on a remarkable run of five straight victories, and the return to form and fitness of ?Lionel Messi has brought the La Liga leaders back to life.

Barca’s last match saw them comfortably dispatch of relegation candidates RCD Mallorca, winning 5-2 courtesy of a Messi hat-trick – a trio of goals which saw him overtake Cristiano Ronaldo with the ?most La Liga hat-tricks (35).

Conte may prioritise the Serie A crown over success in Europe, but qualifying for the last 16 of the ?Champions League would show just how far Inter have come under his tutelage.? With Barca likely to rest some first-team players, the hosts have a fabulous opportunity to pull off a historic European victory. However, regardless of team selection, Barca are blessed with quality from back to front. With the likes of Suarez, Antoine Griezmann and Ivan Rakitic, Valverde’s side have a great chance of getting a result and ending the group stages on a high.