It’s been a rollercoaster of a week for Inter, with skipper Mauro Icardi stripped off the captaincy before the Nerazzurri’s win over Rapid Wien in the Europa League.

But Luciano Spalletti’s men must now turn their attention back to domestic action, as they take on Sampdoria at San Siro in what could turn out to be an exhilarating Serie A clash.

The hosts will have the opportunity to strengthen their grip on third place, as they look to seal their passage back into next season’s Champions League. Their opponents Sampdoria currently sit ninth in the table and will hope to shake off their recent patch of indifferent form, which has seen them lose without scoring in their last two games.

Here’s 90min’s preview of the Serie A clash.

?Inter have several question marks over their available squad for Saturday’s fixture, with the aforementioned Icardi unlikely to be included in the hosts squad with a knee injury. Lautaro Martinez will likely lead the line as a result, supported ably by the likes of Ivan Perisic and Radja Nainggolan.

Sime Vrsaljiko is definitely out with a knee injury, with Cedric, signed on loan from Southampton, likely to continue deputising at full-back. Sampdoria will again be missing Gianluca Caprari, who is still recovering from the fibula fracture he picked up towards the end of January.

The game has also come too soon for Edgar Barreto, with his calf complaint having kept him out of the visitors last ten games. 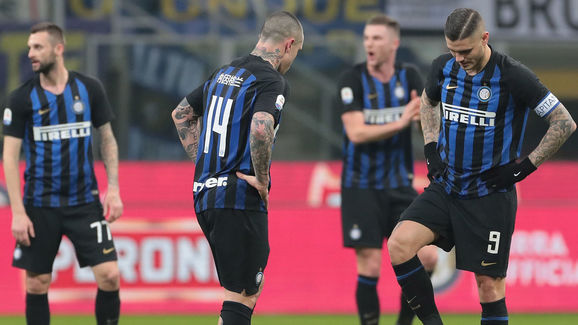 Here are the two teams last five results in all competitions.

This match really could go either way. On the one hand, Inter have the better players on paper and you would expect their home record of recent to pick up.

Icardi’s absence up front though could cause unrest and nerves among the squad, as he often bails the home side out of trouble with his regular goals contribution. Sampdoria, though they haven’t been in the best form recently, will be licking their lips after Inter’s recent European exploits – but their own poor form means they may just come up short in this one.