Mourinho had his fingerprints all over the Roma performance as his side defended heroically for large parts and got their winning goal with their first shot on goal when Nicolo Zaniolo skilfully prodded home after 32 minutes.

Roma, whose only previous continental title was the old Fairs Cup in 1961, held off a spirited comeback from their Dutch opponents, who were twice denied by the woodwork in the second half. They ensured that Mourinho became the first manager to win a European trophy with four different clubs and took his overall tally to five major European trophies.

The Dutch side, who last won the UEFA Cup in 2002, dominated the early possession but failed to create any meaningful chances and were punished when Zaniolo chested down a cross from Roger Ibanez and put his side in front.

Man of the match: Chris Smalling

Feyenoord ended the half with their first real chances from Orkun Kokcu and Cyriel Dessers but it was routine work for former Wolves goalkeeper Rui Patricio.

Feyenoord maintained their momentum at the start of the second half and almost levelled when Roma defender Gianluca Mancini deflected a short corner onto his own post before Rui Patricio saved well.

Patricio also did well to tip a drive from Lutsharel Geertruida onto the post before a potentially pivotal moment after 54 minutes, when Tammy Abraham appeared to be fouled by last man Marcos Senesi as he looked to burst clear, only for the referee to take no action.

The impressive Smalling blocked a drive from Kokcu on the edge of the box then was in the right place again to stop a drive from Dessers as the minutes ticked by.

Lorenzo Pellegrini almost made it two for Roma before Feyenoord spurned a golden opportunity to level in injury time when Bryan Linssen missed a sitter from close range.

As the whistle blew in Tirana, Mourinho celebrated by raising five fingers to the sky in homage to his European conquests.

Man of the match: Chris Smalling

Look away now Manchester United fans. It just shows you what can be achieved when players are removed from the pressure cooker at Old Trafford which has an unfortunate ability to suffocate a player of late.

Of course, Smalling left Manchester permanently in 2020 so perhaps that is a little dramatic, but this performance from Smalling was more than good enough to be a starter in the Manchester United back four of this season. Smalling played like someone completely at home and happy with his football in Italy where he has relished the lifestyle. Cyriel Dessers – Feyenoord’s jewel in their crowd – hardly had a kick up against the 32-year-old who made three fantastic blocks in the second half when Roma were asked to defend their box at regular intervals. 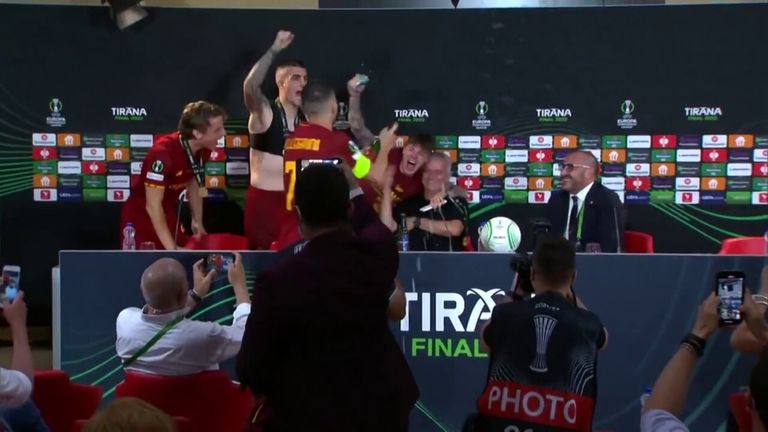 Jose Mourinho was soaked in champagne by his Roma players during his press conference after the Italian side won the inaugural UEFA Europa Conference League.

“The great thing about my career is that, aside from the Europa League with Manchester United, doing it with Porto, Inter and Roma is very, very, very special,” Mourinho said.

“It is one thing to win when everyone expects it, when you made the investments to win, but it’s quite another to win when something feels immortal, that feels truly special.

“This remains in the history of Roma, but also mine. I was told only I, Sir Alex (Ferguson) and Giovanni Trapattoni won trophies in three different decades. It makes me feel a little old, but it’s nice for my career.”

It represented a fine end to his first season in the Italian capital for Mourinho, having steered his side to a sixth-placed finish in Serie A this term.

The Portuguese has no plans to seek new challenges, as he is already looking to next season with the club.

“Now I am staying, there are no doubts,” Mourinho added. “Even if some rumours emerge, I only want to remain at Roma.

“We must understand what our owners, who are fantastic people, want to do next season, because this is history, but we can build a really strong project with honest professionals.

“Of course I feel like a Romanista, but that might be my way of working. I am a Porto fan, an Inter fan, a Chelsea fan, I am crazy about Real Madrid, I am now a Roma fan, I belong to all those clubs because we had these moments together.” 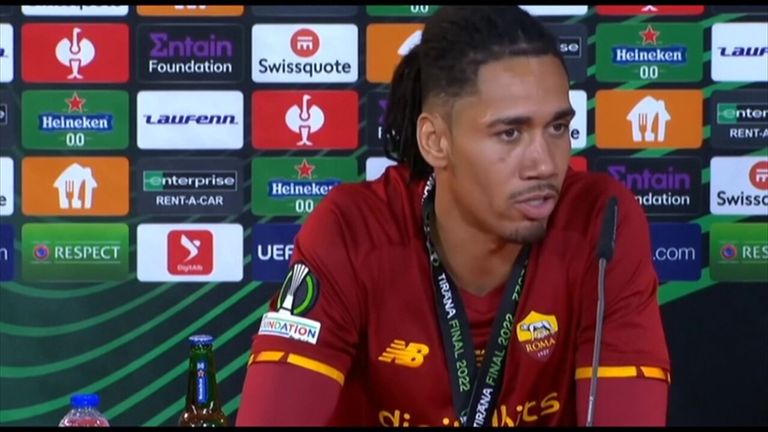 Chris Smalling hailed the Roma fans and dedicated the club’s UEFA Europa Conference League victory to them after defeating Feyenoord 1-0 in the final.

Slot: We got no luck

Feyenoord coach Arne Slot said: “It’s always interesting to see how the first 15 minutes go. In that phase, we had good control of the match. But a half is 45 minutes long, and our problems were to do with the choices our players made, with and without the ball.

“I told the players during the break what they had to do better. In the second half we were sharp from the first moment, but you need a bit of luck and we didn’t get it. We had the time and opportunity to score, and we didn’t. Maybe that’s to do with the quality of the opponent.