?Inter will be playing Champions League football next season, after a stunning comeback win over Lazio at the Stadio Olimpico. An Ivan Perisic own goal and a brilliant team goal finished by Felipe Anderson were rendered irrelevant by goals from Danilo D’Ambrosio, Mauro Icardi and Matias Vecino.

For neutrals as well as Inter and Lazio fans, this was surely the most hotly-anticipated fixture of the final weekend of the Serie A season, being essentially a play-off for the fourth available Champions League place. The atmosphere at the Stadio Olimpico was electric with anticipation – and, unless you were a Lazio fan, the match didn’t disappoint.

After a bright start by Inter, with Perisic looking dangerous down the left, Lazio missed an absolute sitter when Luis Felipe blazed over the bar from close range after good work by Ciro Immobile. Then the hosts struck a devastating blow in the ninth minute, when a misdirected shot by Adam Marusic from the right wickedly deflected off Perisic past Samir Handanovic, who stayed rooted to the spot.

It was harsh on Inter, and especially on Handanovic, who had made a fine save moments earlier from a Sergej Milinkovic-Savic shot. And yet, although the visitors showed excellent passing accuracy and movement in midfield, they failed to carve out clear chances.

In the 22nd minute, Lazio did Inter’s work for them by giving the ball away cheaply in their own half, and Mauro Icardi had a clear run on goal. Unfortunately for I Nerazzurri, he missed the kind of opportunity he’s been taking with aplomb all season, scuffing his shot harmlessly wide.

In fact, the two rivals for the Capocannoniere, Icardi and Immobile, both looked some way short of their best. Although the Lazio striker had been passed fit, he certainly didn’t look it. It was no surprise when he was substituted in the second half.

With the two sides’ star strikers failing, the goals came from less likely sources. Shortly before the half-hour mark, Inter’s Danilo D’Ambrosio forced home a corner by the impressive Marcelo Brozovic, having been left unmarked by Immobile.

Then, in the 41st minute, Felipe Anderson started and finished a majestic counter-attacking move, bursting forward at least 100 yards before sliding a nonchalant finish past Handanovic.

Things looked bleak enough for Inter at half-time, but it could have been even worse – Milinkovic-Savic hit the woodwork with a superb free kick, and also forced a save from Handanovic with a ferocious drive. 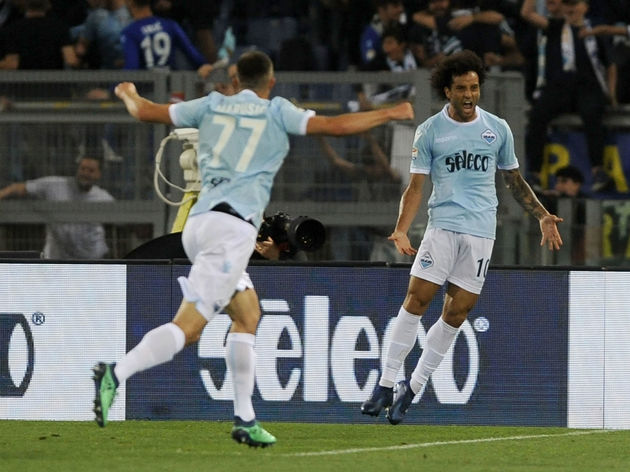 ?Inter had to throw caution to the wind in the second half, and Perisic played alongside Icardi as a second striker. The Croat made a number of intelligent runs, battled for every ball and occasionally threatened the Lazio goal – but he failed to make a decisive breakthrough.

Seemingly realising that this tactic wasn’t working, Luciano Spalletti brought on Eder for the disappointing Antonio Candreva, and Perisic moved back out wide. Yet Lazio still looked likelier to extend their lead than to concede, and Anderson wasted a presentable chance to double his tally by firing into the side netting.

Just as it looked as if Inter’s Champions League hopes were fading away, they were handed a lifeline. Having been controversially denied a penalty earlier in the half after review by the VAR, the referee had no doubt about Stefan de Vrij’s clumsy challenge on Icardi. The Argentine made no mistake in the 78th minute, equalling the 29 Serie A goals scored by Immobile, who could only look on helplessly.

Soon afterwards, a nervous situation for the hosts turned into a catastrophe, as Senad Lulic received a second yellow card for a reckless foul. A hotly-contested encounter had seen a flurry of cautions, so it was no surprise to see a player dismissed. Nevertheless, Lulic must have been kicking himself for committing such a pointless challenge in a fairly innocuous situation.

Then, in the 81st minute, Vecino headed home from a corner to send Inter into raptures, and Lazio into desperation. Lazio piled on the pressure, but it was all to no avail. Inter celebrated in disbelieving joy, while the hosts must have wondered how they had managed to throw away what looked like a comfortable position.

Lazio boss Simone Inzaghi will likely face tough questions about his late substitutions including the removal of Immobile, which seemed to unsettle his side and give Inter momentum, while Spalletti can prepare for Inter’s return to European football’s elite next season.