?Lazio will host ?Inter at the Stadio Olimpico on Sunday, in what promises to be a ferocious battle for Serie A’s last remaining UEFA Champions League place – with champions ?Juventus, runners-up ?SSC Napoli and Lazio’s city rivals Roma having already qualified for Europe’s premier club competition.

On the plus side from an Inter perspective, their fate is still in their hands. On the minus side, they face a very tough task in Rome, not least because they trail their hosts by three points.

Because the two sides drew 0-0 at the San Siro earlier this season – and their head-to-head record is the first criterion used to separate sides level on points in Serie A – a win for Inter will see them leapfrog Lazio, despite the Roman side’s superior goal difference.

However, Lazio will still likely be the more confident of the two sides, seeing as they need only a point and haven’t lost at home since early March, when ?Juventus won 1-0 at the Stadio Olimpico on their way to achieving a seventh successive Scudetto.

How Inter must rue conceding two late goals to Juve, and scoring just once against Sassuolo despite enjoying 74% possession – those two recent defeats at the San Siro now look extremely costly in the race for fourth place.

Nevertheless, the visitors may draw some encouragement from the way Austrian side FC Red Bull Salzburg hammered I Biancocelesti in the second leg of the Europa League quarter-final in April. Unfortunately for Inter, that match was in Austria – Lazio won the home leg 4-2. Since falling to Juve at home, Lazio have enjoyed a ten-match unbeaten run in Serie A – including a 4-0 thrashing of Sampdoria in April.

Sunday’s hosts have scored freely for most this season, netting a staggering 87 league goals – three more than the champions. Nevertheless, I Biancocelesti’s impressive run has stalled in the last two matches – they were held 1-1 at home by Atalanta and could only draw 2-2 with struggling Crotone.

Inter will no doubt be encouraged by their last result away from the San Siro – a 4-0 win over 15th-placed Udinese, although Lazio are likely to be a very different proposition on Sunday.

However, that thumping victory was sandwiched between two disastrous home defeats – I Nerazzurri ?lost 3-2 against Juventus and 2-1 against Sassuolo. Before the Juve defeat, Inter had won two matches in a row – a 4-0 thrashing of Cagliari and a narrow 2-1 victory over Chievo. Lazio will definitely be without midfielder Luis Alberto on Sunday, who is ruled out with a thigh injury. More disappointingly for manager Simone Inzaghi, it seems increasingly unlikely that striker Ciro Immobile will be available, having suffered a hamstring strain against Torino in April.

Immobile is currently the leading scorer in Serie A with 29 goals – although Inter striker Mauro Icardi is just one goal behind him and could win the race for the Capocannoniere on Sunday.

Like Immobile, Lazio midfielder Marco Parolo is also recovering from a hamstring strain, while left back Jordan Lukaku (Manchester United striker Romelu’s younger brother) may also be unavailable because of a muscle injury.

According to the latest reports, Inter have no current injury worries for Sunday, while neither side has any players unavailable through suspension. The statistics tell you all you need to know. Argentina striker Icardi has netted 28 times in the league for his club this season – more than twice as many as the next-highest Inter goalscorer, and nearly half of Inter’s Serie A goals all season.

Quite simply, the visitors will most likely need him to get the better of Lazio centre back Stefan de Vrij and do what he does best – find the back of the net.

Against a Lazio side which has shipped an extraordinary 46 league goals this season, Icardi may fancy his chances. 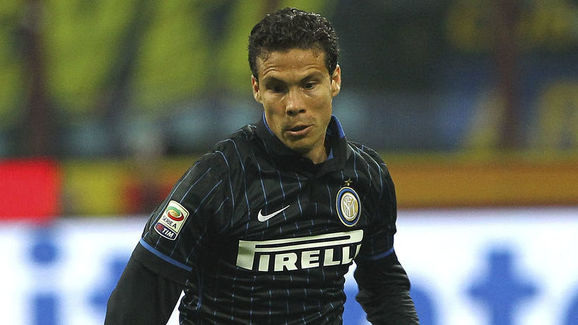 In case Lazio feel at all complacent about their prospects against Inter on Sunday, they would do well to cast their minds back three years to another home clash with the Milanese side, in which Hernanes fired the visitors to victory.

The Brazilian midfielder scored twice against his former club, cancelling out Antonio Candreva’s sixth-minute opener with a free kick in the 26th minute, before winning a one-on-one duel with Lazio’s substitute keeper Etrit Berisha in the 84th minute.

It could have been an even worse scoreline for the hosts, seeing as they had two players sent off – including keeper Federico Marchetti. In fact, Berisha’s first act after coming on was to save Mauro Icardi’s penalty, which Marchetti had just conceded.

While the hosts may feel proud that they held out for more than twenty minutes with nine men before conceding Inter’s winner, they will no doubt need to show far greater discipline on Sunday to avoid another home defeat against the Nerazzurri. Even without their leading scorer Immobile, Lazio must surely still be the favourites to secure fourth place in Serie A.

Both sides have stuttered in recent matches, but the task facing Inter – in the hostile atmosphere of the Stadio Olimpico, and on the back of two defeats in three matches – still looks extremely daunting.

Of course, if Inter score an early goal, their chances of success will dramatically increase, as Lazio will be forced to attack – and I Biancocelesti have comfortably the worst defensive record in Serie A’s top eight.

However, if they fail to score that early goal, I Nerazzurri will likely have to settle for fifth place this season.