?Premier League rivals Manchester United and Arsenal have been alerted to the potential availability on Inter duo Mauro Icardi and Ivan Perisic ahead of the summer transfer window.

Both attacking stars are apparently edging towards the exit at San Siro, with former club captain Icardi having endured a major falling out with the Serie A club which saw him stripped of captaincy and has been in a self-imposed exile from the Nerazzurri’s setup ever since.

With ?Icardi having not played since 9 March, ?Manchester United are apparently among those interested in a move to lure the Argentine away from Milan, according to the ?Mirror. La ?Gazzetta dello Sport also suggest that ?Real Madrid are in the mix to sign the striker.

However, it is said that ?Inter’s apparent desire to replace Icardi with United forward ?Romelu Lukaku could work in the Red Devils’ favour, with a potential swap deal in the offing, though the Belgian’s recent upturn in form is likely to see United hold onto their number nine.

Icardi is apparently valued at £90m, meaning that the Argentine could complete a high-expense strike force alongside Lukaku at Old Trafford.

Meanwhile, ?Perisic’s future at San Siro was clouded with uncertainty amid widely-reported interest from ?Arsenal in January, though Unai Emery’s side ultimately failed to recruit the Croatian in their pursuit of reinforcements in the wide areas.

However, the Mirror also suggest that the winger could be made available for between £30m and £35m in the summer, and Arsenal could launch yet another move for their long-term target – though they would face competition from ?Atletico Madrid in the summer. 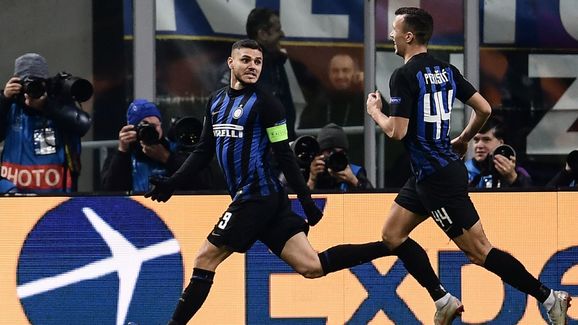 However, the Gunners may hold the upper hand in any potential bidding war, as it is suggested that the 30-year-old would prefer a move to the Premier League. Financial restrictions at the Emirates halted the move last time, but such a fee should not be an issue for Arsenal in the summer.

Perisic has found his way back into Luciano Spalletti’s starting XI since his January move failed to come to fruition, and has scored seven goals in 34 appearances this term.

Inter appear set for a summer of upheaval, with the Nerazzurri apparently contemplating sacking Spalletti on the back of a poor season which recently saw them knocked out of the Europa League by Bundesliga side Frankfurt. The Nerazzurri are also fourth in Serie A, 25 points adrift of leaders ?Juventus ahead of Sunday’s Milan derby.