Inter face AC Milan on Sunday evening hoping to halt their rival’s form as the battle for Champions League qualification continues to heats up.

Inter are one point behind the Rossoneri as the season reaches the final hurdle. Inter have the advantage over Milan in recent seasons, remaining unbeaten in seven games played during normal time. Milan, however, are the form team heading into the derby, winning all of their last five league games, which Inter will be hoping to overturn.

Inter are missing captain and top scorer Mauro Icardi, which is inarguably a blow to their chances. With Radja Nainggolan, Miranda and Sime Vrsaljko also missing, Inter are unable to field their strongest eleven.

Here’s a look at how they could line up:

Samir Handanovic (GK) – The former Slovenian international has been a huge success since joining from Udinese in 2012, racking up 246 league appearances for the Nerazzurri. He has remained as consistent as ever this season.

Danilo D’Ambrosio (RB) – The 30-year-old struggled to hold down a regular starting place for the first two years of his ?Inter career, but since 2016 has been a mainstay at full-back.

Milan Skriniar (CB) – A revelation since his 2016 transfer from Sampdoria, the Slovakian has continued to impress at the heart of Inter’s defence.

Stefan de Vrij (CB) – The 27-year-old joined on a free last summer after an impressive campaign with Lazio, where he has been steady despite not reaching his previous lofty heights.

Kwadwo Asamoah (LB) – A long-serving member of a dominant ?Juventus side which won Serie A in every season the Ghanaian was there, the 30-year-old joined for free last summer – where he has predominantly been deployed as a left back, although equally capable of playing in midfield.

Matias Vecino (CM) – The tough-tackling Uruguayan is in the team to clean up defensively, a hard-worker who allows his teammates the freedom to attack.

Marcelo Brozovic (CM) – The talented Croatian is the key player in the Inter midfield, linking the defence to the attack with his passing, contributing energetically without the ball and chipping in with goals.

Matteo Politano (RM) – Still only on loan from Sassuolo, Politano is likely to be purchased permanently in the summer. Less prolific than in the 2017/18 season, the Italian has nonetheless impressed with his technical quality.

Joao Mario (AM) – Injury to Nainggolan allows Mario a chance to impress, with the ex-?West Ham United loanee never quite justifying the ?£36 million it took to acquire him from Sporting CP in 2016, the 26-year-old always impressing more at international level than for his clubs.

Ivan Perisic (LM) – A vital player for Inter since his transfer from Wolfsburg in 2015, ?Perisic’s output has dropped this season, having scored double figures in the league in both the 2016/17 and 2017/18 seasons. He remains a dangerous player, capable of clinical finishes with either foot. 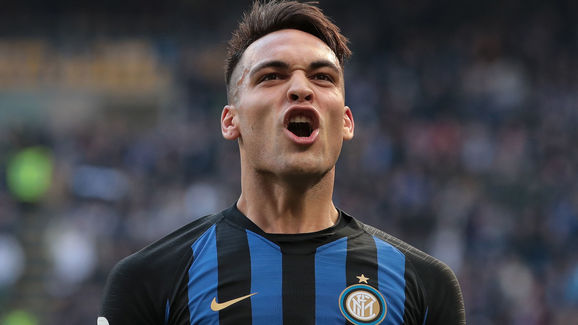 Lautaro Martinez (ST) – The 21-year-old was a deadly goal scorer in his homeland of Argentina, scoring 22 goals in 48 league games, mostly as a teenager. With ?Icardi injured, Martinez has a major opportunity to display his talents.