Newcastle United defender Davide Santon believes that the Tyne-Wear derby against Sunderland is bigger than the rivalry between his former club Inter and neighbours AC Milan.

The 21-year-old played in three Milan derbies during his time with the Nerazzuri but, after taking part in last season’s clash with Sunderland at St James’ Park, he is in no doubt over which is the fiercer rivalry.

“The Milan derby is a very important game but not like this one,” Santon told BBC Newcastle.

“Here there is more rivalry, everybody thinks about the game, it’s fantastic.”

Sunday’s clash will be Santon’s first trip to the Stadium of Light, and the Italian international is well aware of the importance of the match for his side.

However, the former Inter man joked that his side should have no problems maintaining their excellent record on Wearside with Shola Ameobi in the side, as the Newcastle striker has scored an impressive seven goals against The Black Cats.

“Sunday we have to win 100%, but it’s OK because if we put Shola Ameobi on the pitch and he scores,” he said.

“It’s an important game, that we have to concentrate on and make sure we win. I played the second game [last season], it was fantastic.

“When Shola scored I was so happy for the team because I know how important it is for the fans from the city.”

Italy are not exactly known for their tendency to hand out caps to teenagers, nor do AC Milan have a great reputation for shunning experienced heads in favour of starlets. But one player bridging the gap both domestically and internationally right now is Stephan El Shaarawy.

The 19-year-old forward made his Azzurri debut in the friendly against England in Berne in August and has since gone on a magnificent run of form which has seen him carry an ailing Milan side on his back. A run of five goals in 11 days has sparked a recent upturn in results that has postponed the death knell for Rossoneri boss Massimiliano Allegri.

Now his international coach Cesare Prandelli could be set to hand him a competitive debut in the famous blue shirt as Italy travel to Armenia for Friday’s World Cup qualifier. But, even if he does not see any game time in Yerevan or at San Siro against Denmark on Tuesday, his 59-minute showing against England ensured that he joins a small band of Italians to appear for their country at senior level before turning 20.

But El Shaarawy’s next job is to ensure that he replicates his recent performances for both Milan and La Nazionale for some time to come. Others who have in the past looked set to go on to bigger and better things have followed their Italy debuts with downturns in form belying their immense potential. 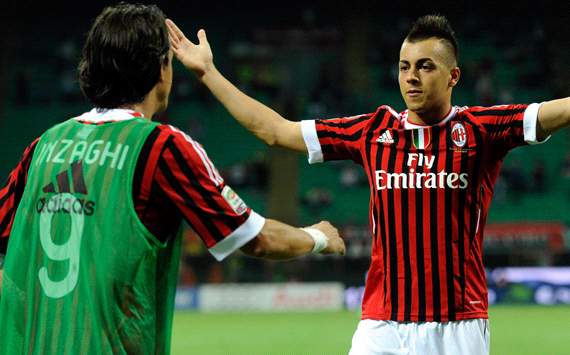 Some players were destined for greatness from a young age. Giuseppe Bergomi was famously thrust into the unforgettable 1982 World Cup clash with Brazil at the age of 18, with only a single cap in a friendly against East Germany to his name. After performing admirably in the Paolo Rossi-inspired 3-2 triumph, the defender would go on to earn a World Cup winner’s medal in only his fourth game for his country and later captained the national side to Euro ’88 and at the home World Cup in 1990.

One of his defensive partners at Italia ’90 was also his captain when he made a surprise return to the national side – after seven years in the wilderness – in time for the 1998 World Cup in France, as Paolo Maldini continued a glorious career of his own having also been a teenage debutant for Italy.

Though Maldini was never able to emulate Bergomi by winning a World Cup, he was a runner-up in 1994 and also at Euro 2000, before eventually hanging up his boots in 2002 as Italy’s most-capped player at the time, with 126 appearances in the famous shirt. He remains one of the most storied defenders in football history, and it is seen as one of those quirks of fate that he would never get his hands on an international trophy.

Like Maldini, Gianni Rivera had been a teenage prodigy, a Milan legend and a Mondiale finalist, but he was also a part of the successful Euro ’68 winning Azzurri side. And before him the likes of Giampiero Boniperti and Giuseppe Meazza had debuted as teenagers with the national team, with Meazza scoring a phenomenal 33 international goals on the way to becoming a two-time World Cup winner.

Of course, Italy’s most recent World Cup success was achieved with the help of another former teenage sensation, in the shape of Gianluigi Buffon. He made his international debut in a crucial play-off in the snow in Russia in 1997 and fulfilled his potential on the global stage by shutting out the opposition from open play as Marcello Lippi’s side marched to glory in Germany in 2006.

But there is one recent example of a player who has not quite hit the same heights as some of his young contemporaries, as Davide Santon’s career has seemingly reached an early crossroads.

Handed his Inter debut by Jose Mourinho just days after his 18th birthday, the full-back was immediately spoken about in the same breath as Maldini, with the mix of youthful exuberance and composure, along with the ability to play at left-back as a right footer, marking him out as an early contender for the berth in the national side that had gone largely unfilled since the Milan star’s retirement.

However, while team-mate Mario Balotelli would go on to excel in the Italy side, Santon has struggled with injuries and form for large spells during the last three years. Since making his Azzurri debut in June 2009 against Northern Ireland, he has played only twice in competitive internationals, with the last of those coming in the dead rubber against Cyprus in November 2009, when Italy had already qualified for the World Cup in South Africa.

From such a promising prospect in his early days at Inter, Santon has suddenly become the warning for the likes of El Shaarawy and Marco Verratti of what can become of a young prodigy. His form since his move to Newcastle United last year has failed to reach a level sufficient enough to earn the call of Prandelli, despite an apparent lack of quality full-backs at the coach’s disposal. Even during the recent controversial absence of Domenico Criscito, Santon’s name was a long way down the pecking order of potential replacements.

So for El Shaarawy, and for Italy, it is of vital importance that the Milan forward can continue his current streak for years to come. If he can, the national side may well have another future legend in their ranks.

Napoli are considering moves for either Davide Santon or Gianluca Zambrotta, as Partenopei coach Walter Mazzarri looks to bolster his defence.

The Serie A outfit, who finished fifth last season and won the Coppa Italia, have missed out on their first choice target, Lyon’s Ali Cissokho, due to financial complications.

With the deal for the France international apparently dead, and long-term target Federico Balzaretti electing to join Roma, Santon and Zambrotta have shot to the top of Mazzarri’s shopping list. Fans are wondering how will the club be able to buy these players.

The versatile Santon has insisted that he is settled at Newcastle after helping the Premier League side qualify for this season’s Europa League, but coach Alan Pardew could be willing to listen to offers for the Italy international.

Napoli president Aurelio De Laurentiis is keen on the Santon deal, although doubts persist regarding the 21-year-old’s experience and tactical nous.

Released by Milan this summer, Zambrotta – now 35 – represents a more experienced option for both Mazzarri and De Laurentiis.

The 2006 World Cup winner is attracting interest from a number of foreign suitors, but may prefer to join Mazzarri’s innovative side and remain in Serie A next season.

Newcastle United are keen on bringing in Roma forward Bojan Krkic this summer, and are prepared to sacrifice Davide Santon in order to push through a deal, Goal.com understands.

The 21-year-old attacker struggled to adapt during his first season at the Stadio Olimpico, having arrived on a two-year contract from Barcelona in July 2011, leading to suggestions new coach Zdenek Zeman is looking to move him on.

And the Magpies have stepped forward as potential suitors, but any agreement would still allow the Blaugrana to exercise their option of bringing him back to Camp Nou at the end of the upcoming campaign.

Roma secured Bojan, who scored seven goals in 33 Serie A appearances for the Giallorossi last season, in a €13 million transfer, but would have to pay another €28m if they wanted to retain the one-cap Spain man beyond 2012-13.

Given the expensive nature of a potential transfer and the capital club’s search for a new full-back, Newcastle are willing to include Santon in a bid to further convince Roma to part with the player before the end of the summer transfer window.

The defender joined the Premier League outfit for €6m from Inter last August and, despite starting slowly at the Sports Direct Arena, eventually made 24 appearances under manager Alan Pardew, helping the side to a fifth-placed finish.

Nonetheless, the Italy Under-21 international would be happy to return to the peninsula, but only with a prestigious club, and Roma could be his next port of call if Bojan decides his future lies in England.

However, while a transfer could well be in the pipeline, Bojan Krkic is believed not to be keen on making the move as he believes he would flourish under the tutelage of Zeman – a coach renowned for his attacking philosophy.

Newcastle defender Davide Santon insists he will not be leaving the club to return to Serie A, and is hopeful that they can sign Lille defender Mathieu Debuchy.

The 21-year-old enjoyed a good first season in the Premier League after joining from Inter, making 27 appearances as the Magpies defied expectations and only narrowly missed out on the Champions League.

Santon has been linked to a move back to Italy with Roma being touted as a potential destination, but the Italian full-back says he has only just arrived in England and feels it is too soon to pack up and leave.

He told calciomercato.com: “I know Roma are looking for a right-back and they showed interest in me some time ago, but Newcastle immediately refused to give me up.

“That’s okay for me because I have familiarised myself in England and I have no plans to move. I’ve only been here for a year and it is too early to pack up and come back to Italy.”

Meanwhile, Newcastle themselves have been linked with Lille and France right-back Mathieu Debuchy.

However Santon, who can play on either side, says he doesn’t feel threatened by Debuchy’s potential arrival.

“Debuchy to Newcastle? I am calm,” Santon said.

“Pardew had told me that he had thought about playing me on the right, but also that another right-back would come.

“Debuchy or whoever, is welcome, especially if it is a good player who can help the team. Then, we’ll see who the coach decides to pick.”