?Inter midfielder Radja Nainggolan has hit out at new reports suggesting he is injured, taking to Twitter to inform the world that such reports are ‘invented.’

The midfielder’s statement comes after some Italian media outlets took his 78th minute substitution against Bologna at the weekend as meaning the Belgian is suffering from an injury, rather than just the precaution it was expected to be.

The tweet translates to “Thigh problems? And they’re worrying? It’s incredible what they can invent.”

‘They’ in this instance, is thought to refer to newspaper outlet ?La Gazzetta dello Sport, among other Italian media, who reported on the ‘injury’ in the immediate aftermath of Inter’s win over Bologna, in which Nainggolan made his debut and opened the scoring. 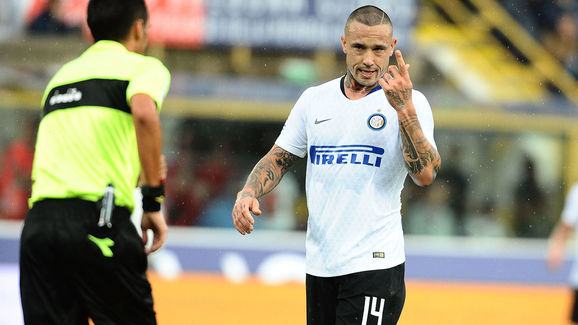 Falsely reported injury aside, however, Nainggolan’s impressive strike midway through the second half was followed by a late three minute double salvo from Antonio Candreva and Ivan Perisic as ?Inter ran out 3-0 winners.

It marked a satisfactory first appearance for his new club after what proved to be a trying summer for the Belgian.

Control with the left, perfect shot with the right, Radja Nainggolan gives Inter exactly what they need