That lightning acceleration. That Brazilian flair. That dodgy haircut.

We all have our own memories of terrorised Ronaldo is considered one of the greatest footballers to have ever walked this earth, and he truly was a joy to watch. The two-time Ballon d’Or winner played with such a grace and speed that he made the game look so easy – a sign of an elite player.

As football fans, we were privileged to watch the genius at work for a number of years, but his plaguing knee injuries undoubtedly robbed us all of many more historic goals and tricks.

The former Brazil international is a footballing legend, and it’s only fair that we look back at the great man’s most iconic moments on his 43rd birthday.

Hat-Trick vs Bayer Leverkusen in 1994

This is the night where it all began for Ronaldo. He was making a name for himself in Holland with PSV, but the teenager burst onto the European stage in an exhilarating encounter against Bayer Leverkusen in the UEFA Cup.

Ronaldo, unknown to most at the time, single-handedly destroyed the Leverkusen defence in one of the most impressive individual displays of all time. Although the crumbling Eindhoven backline continued to ship goals, this irrepressible youngster stunned the world with his frightening pace, rocket-powered shots and deft touch in front of goal.

Ronaldo bagged a hat-trick on the night, his second goal a wonder-strike from 25 yards, and although PSV fell to a 5-4 defeat in Germany, the Brazilian wonderkid had given the world a glimpse of what was to come over the next decade.

Still incredibly young and raw, Ronaldo was taking the world by storm. It’s a crying shame that the Brazilian only spent one season at Camp Nou, but he certainly made the most of his time with the Catalan club.

The ?Barca striker scored an incredible 47 goals in 49 appearances for La Blaugrana and the majority of them were pieces of art, but his goal against SD Compostela ranks highest of all.

“I once saw Ronaldo score a goal for Barcelona where he beat five or six players. As I’ve said, he was phenomenal. Maradona at his best was the best I ever saw. A superb player. Ronaldo would be a close second though.” pic.twitter.com/nHKQO5PPaU

Picking up the ball in his own half, Ronaldo danced away from a challenge, released himself from the grip of the most cynical shirt-pull of all time, and set off on a storming charge towards a visibly quaking backline.

O Fenomeno weaved through several tackles before rifling home, leaving Barca manager Bobby Robson gobsmacked on the touchline. A goal so good, no one in the stadium could truly believe it had happened.

Cup final goals are always special, but a goal to seal a win against your league rivals in European competition always tastes a little bit sweeter. ?Inter striker Ronaldo wrapped up a 3-0 victory against fellow Serie A side Lazio, and he delivered his trademark finish which summed up the man’s brilliance. 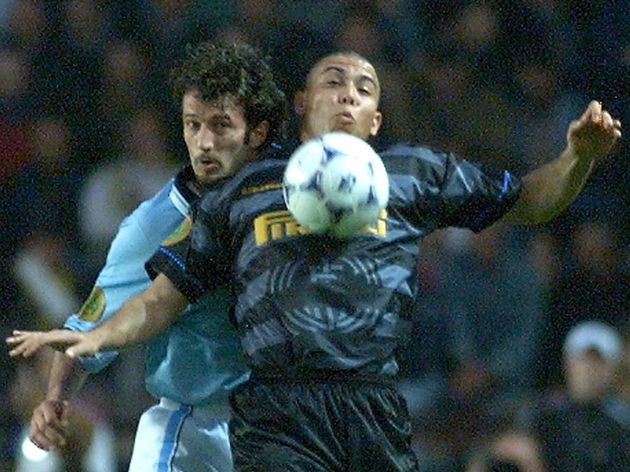 Breaking the offside trap with expert timing, Ronaldo tore away from the flagging defenders, sucked the goalkeeper in before rounding him with ease, and nonchalantly rolled the ball home.

It was a move he produced so regularly, but no keeper in the game could live with his devastating drop of the shoulder when through on goal.

Debuts are not an easy occasion for some players. So much expectation to deliver, and the world’s eyes are boring into you.

You know what helps? Scoring 61 seconds into your first match. And that’s exactly what O Fenomeno did. 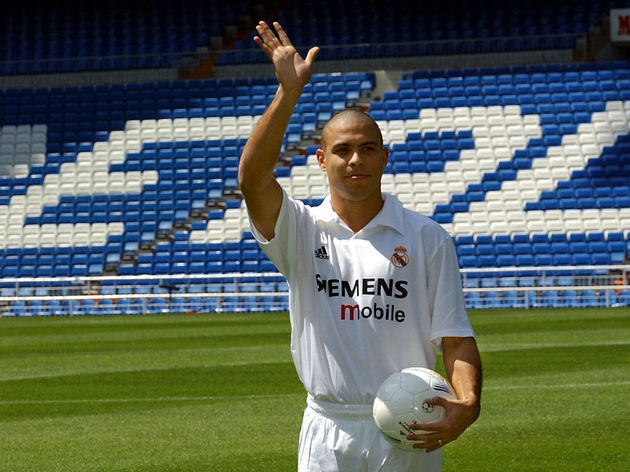 Coming on as a substitute, Ronaldo immediately got his name on the ?Real Madrid scoresheet, bringing down a difficult cross from the left and lashing a volley past the helpless goalkeeper.

I imagine that calmed the nerves of just about everyone at the Santiago Bernabeu, although I doubt Ronaldo was too concerned to begin with. The new Galactico went on to add a second goal later in the match, and became an instant fans’ favourite in the Spanish capital.

This was the pinnacle of the great man’s career. Ronaldo had suffered heartbreak four years prior when Brazil lost the World Cup final to France, and the young talisman had suffered a serious convulsion hours before kickoff.

The tournament favourites entered the competition with great expectations and the weight of a nation on their shoulders, but the Samba boys duly delivered, banishing the memories of France ’98.

Ronaldo was the star of the World Cup, and endedscorer with eight goals; bagging a brace in the final.

And of course, we all remember that suspect trim he rocked against Germany, which unfortunately never really caught on.

This is still one of the greatest moments in Champions League history, and Ronaldo’s Real Madrid treble is considered one of the best hat-tricks that football has ever witnessed.

The Spanish giants rode into Manchester brimming with confidence, and O Fenomeno delivered one of the outstanding performances of his career against Sir Alex Ferguson’s side.

?His first goal was a brilliant first-time finish, catching goalkeeper Fabien Barthez by surprise, lashing the ball fiercely in at the near post.

Ronaldo’s second goal was a tap-in, finishing off some neat buildup play, but the pièce de résistance however, was his hat-trick goal.

Ronaldo was applauded off the pitch by the entire Old Trafford crowd, which tells us all we need to know about one of football’s greatest servants.