Sampdoria welcome Inter to Stadio Luigi Ferraris on Saturday in the next round of fixtures in Serie A, with Antonio Conte’s men looking to retain their spot at the top of the table.

I Nerazzurri come into the game having won each of their first five matches of the season, resulting in them currently sitting two points clear of Juventus in second. Most recently, the table toppers prevailed in a tight match against Lazio on Wednesday, winning 1-0. Sampdoria, meanwhile, have endured a torrid start to the new season and currently sit bottom of the league having managed to pick up just the solitary win to this point – a slender 1-0 victory over Torino. It’s top against bottom, and both sides will be eager to put in a strong showing.

Here’s 90min’s preview of the game.

Sampdoria will be without Jeison Murillo after he picked up a red card in their last outing against Fiorentina. More worryingly, last season’s top goalscorer The two teams have faced off against each other on 33 occasions, with Inter, somewhat unsurprisingly, holding the better record. The Milan-based side have claimed victories on 19 occasions, whereas their opponents have only won five times. The two sides have also drawn nine matches. The last meeting between the two saw Inter prevail in a tight contest that ended 2-1. Danilo D’Ambrosio gave the hosts the lead on 73 minutes but Manolo Gabbiadini equalised just two minutes later. However, in a frantic few moments, Radja Nainggolan bagged the winner on 78 minutes to give his side all three points.

Sampdoria have endured a hugely underwhelming start to the new season, currently sat bottom of the league table. Eusebio Di Francesco’s men have achieved just the one triumph so far – a narrow 1-0 win over Torino at home.

Most recently, Sampdoria slumped to defeat once more, this time away to Fiorentina. Despite, Federico Bonazzoli’s late effort, it proved to be no more than a consolation as I Viola held on to win 2-1. However, it was a spirited display by Di Francesco’s men considering they had to play with ten men for 35 minutes, following Murillo’s red card. 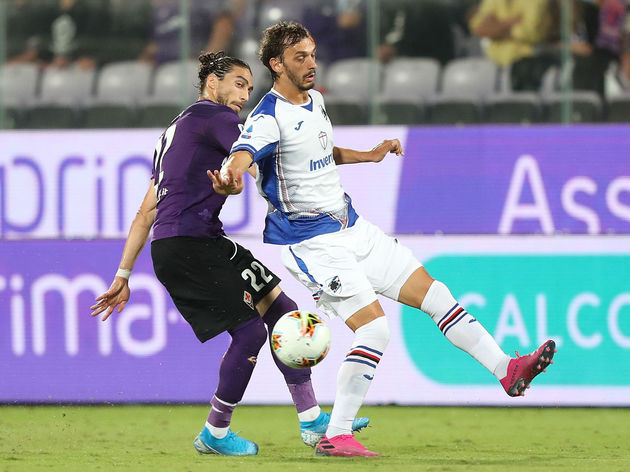 Inter come into the game with the best defensive record in the league, having conceded just a solitary goal. They are currently top of the table, having claimed victory in all five matches this term.

Conte’s men overcame a resilient Lazio side last time out, winning 1-0 to leapfrog rivals Juventus at the top of the table – increasing optimism that I Nerazzurri can end La Vecchia Signora’s domination of Serie A.

Here’s how both sides have fared in their last five competitive fixtures.

This match, on paper, should really see Inter claim a fairly comfortable win. Sampdoria have the joint-worst defensive record in the league and are looking up at the rest of the table from down in 20th place. In contrast, Conte’s men have looked highly impressive as they have bagged three points in each game and are continuing to build momentum. While, of course, football can throw up some major surprises, we don’t expect this upcoming contest to spring one.