The world can feel like a divisive place, now more than ever, but there is one thing that can bind us all together in these testing times. For at heart, we are all free kick fanatics. We all have our favourite? executors of these dead ball delights, because there are few things in football like it. A penalty? That’s just a sh#t free kick, mate. A corner? That’s just an unnecessarily hard one.

And, as with most other art forms – and this is an art form – there are many different ways to execute a free kick, and thus many proponents worthy of celebration.

You can thwack it with untethered power, like, say, a verité filmmaker seeking to out some hard-hitting truths, you can caress it with curl, using the patience and panache of an impressionist painter, or you can sneak it along the floor and under the wall, like an internet writer finding a way to organically reference ‘Game of Thrones’ that doesn’t come across as coat-tailing for clicks.

And you can do a whole lot more, too. The point is: free kicks, they’re great! And, while it seems like every James Ward-Prowse under the sun can hit one top bins these days, there are still only a select few who truly warrant the label of Maester… I mean master (did it work?). It’s always worth reiterating, because all football fans are preternaturally riddled with short-term memory loss, Zinedine Zidane was an absolute CHEVRE. And, his CHEVREness extended to many facets of the game, including this here speciality.

Unfortunately, in his capacity as a CHEVRE at one of the CHEVRE teams, he played with many a player who will come to occupy a place on this list, but when he could muscle himself over a set piece, sacre bleu, it was almost always magnifique. 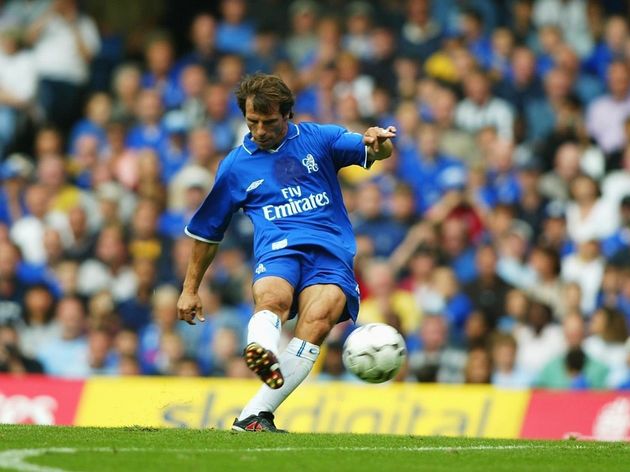 The first of a *spoiler alert* three-man Tricolore, Gianfranco Zola made free kicks fun. Never one to truly thwack it from a set piece situation, and even when he did, the exertion always seemed minimal.

That was Zola. The definitive cult hero is the sixth greatest executor of free kicks in Serie A history, and translated that success to ?Chelsea to great effect. The best way to sum up his free kick style would be to say that every single goal has a look of whipped ease that can only otherwise be found on apps such as Flick Kick Football. It’s like splitting hairs when comparing Del Piero and Zola, but the nod goes to Del Piero for his superior ?Serie A record (by two) as well his unerring confidence in his own dead ball ability, having recently told ?Gazzetta dello Sport that he would still beat Cristiano Ronaldo in a mano-a-mano free kick battle. The Divine Ponytail was a jack of all trades, and master of most – especially those that required the most honed of techniques and unbridled ingenuity.

Sure, he may be best remembered for blazing a penalty over the bar – though, as revealed ?here, that wasn’t completely his fault – but, if the world was a fairer place, and positivity was preyed upon with the same eagerness as negativity, his prowess from the spot – be it inside the box or otherwise – would be the principal takeaway.

His creativity knew no bounds, and that certainly didn’t stop when he lined up a shot with a wall of players assembled in front of him. Yeh, what was said about Zidane, but even more acutely, because Gheorghe Hagi was Romanian, and hasn’t yet won the three requisite Champions League trophies it takes to sufficiently maintain your CAPRA (GOAT in Romanian – see you didn’t even know!!) status as a former star turned manager.

The Maradona of the Carpathians (CAPRAthians) may have been more famed for his wandering runs, but he couldn’t half hit a free kick either, possessing both might and precision in his armoury. An extension of that initial Il Tricolore, we have Andrea Pirlo, which seems fitting, considering the Italian’s storied obsessions with bettering himself from set pieces, which ultimately meant elevating himself above those aforementioned compatriots.

Speaking in his autobiography ‘I Think Therefore I Play‘ (the greatest footballing autobiography title of all time?), the midfielder admitted: “The best ideas come about in moments of total concentration … My own Eureka moment arrived when I was sat on the toilet. Hardly romantic, but there you go. Well, yeh. Some aggregators may have him at second in the all-time free kick scorers list (with 70 goals), but how many of those came as part of the 526 he scored in unofficial games and coordinated friendlies? We don’t know.

Even more pressing than that, though, is the fact I have received many a Pele lecture in my life, most of them justified, but not one has leaned on the player’s set piece prowess. #sorrynotsorry. Here’s where that Pele placing gets tricky, because at least the guy actually scored a few.

Roberto Carlos’ only scored 26 free kicks at club level throughout his career, and his ?La Liga conversion rate was 4.5%.The thing is, though, that fails to take into account all of the international thunderbolts (as a lot of these stats do), the most important of which being THAT mind-bending effort against France.

He may not have been consistent, but he was always unbelievable. Make no bones about it, this man will rise.

But, for now, it’s a testament to ?Lionel Messi’s unbending desire to improve on what many would describe as perfection, year in, year out. Because it feels like the Argentine has only become a free kick master in the last few years and yet he already has 42 goals for club and country.

Oh, and his La Liga conversion rate (8.5%) is better than Carlos, Cristiano Ronaldo and Ronaldinho. Esteemed company, as you’ll find out. Nothing to see here, just a Paraguayan goalkeeper perfecting his craft at the 2002 World Cup.

The second highest scoring keeper in the history of the world is probably most famous for scoring the only ever custodian hat-trick ever recorded, but they all came from the penalty spot, so we’ll skip over those and head to his free kick exploits, because they were just as impressive.

His most impressive, you ask? Well, in 1996 he scored from inside his own half against River Plate. Yeh, seriously. There’s no doubt that ?Cristiano Ronaldo’s powers from the set piece spot have waned since his Manchester United years – we all remember the drought at Real Madrid – but he’s still a legacy dead ball specialist.

And that was proved once more in last summer’s World Cup, when the Portuguese forward produced that last-gasp winner in that most pulsating of opening clashes against Spain. ?Ok, I think I played the ‘don’t-forget-this-guy card too early’. Because, let’s be real, Zinedine Zidane has not been ousted from the GOAT conservation in the same coarse way as Michel Platini. But that’s for principally political reasons (you know, UEFA). So, here, let’s just enjoy the player.

The thing is about those few generationally gifted players, is that they can do pretty much whatever they like on the pitch, and Platini showed this more than ever when a ball was stationary before his feet and the referee blew his whistle to allow him to strike it.

Sure, he could bend it into the top corner if he wanted, but he seemed to prefer to tease it along the ground, under the wall or otherwise, to maximise the opponent’s hurt. Just like, I don’t know, Cersei Lannister? That’s a call back joke, which, if you didn’t read the intro, makes zero sense. Shame on you… Shame. Shame. ?Corrr, could this guy do the business from a free kick.

Ronald Koeman, first of his name, shall be known from here on in on as: ‘Ronald Koeman, Eighth Greatest Scorer From Free Kicks Ever’.

Sure, it’s a clunky nickname, but it’s completely factual. If you want the perfect distillation of Koeman’s set piece dexterity, and it’s wild variation, then watch that stonker ?against Sampdoria in the 1992 European Cup final followed by that deftest of dinks ?against England in 1993. You may not have heard of Arthur Antunes Coimbra, but you’ve definitely heard of Zico, his one-word moniker. One of the first true free kick specialists, he outmanoeuvred most goalkeepers armed with just his all-encompassing footballing intelligence and a two-step run-up.

Indeed, such was his ability from that range, his Brazil teammate Leonardo Nascimento de Araújo has been quoted as saying: “For us, a free kick from the edge of the penalty area was almost like a penalty. For Zico, it was almost a goal already.”

???A definitive CHIVO if ever I’ve seen one, you might think you don’t need another lecture on the greatness of Diego Maradona, but then, have you seen the latest teaser clip from the upcoming documentary about him? Watch it, it’s right there. ?We may have used all the creative ingenuity nods too early, because this man was more creative and more ingenious than just about anybody ever. Bloody hell.

With 65 registered free kick netbusters, the Brazilian Barcelona man is the fourth-highest scorer of free kicks ever…. so why is he fifth? Well, you’ll find out. ??See, the thing is, Ronaldinho was a better player than David Beckham in almost every way… except for this very specific way. Despite notching one more set piece score than the Englishman, Becks’ whole legacy was built upon his delivery from free kicks/corners.

He is also probably the owner of the most famous free kick in history (at least on these shores). I don’t even have to say which, because everybody knows. EVERYBODY KNOWS. A controversial character off the pitch (by that I mean almost every kind of terrible), Sinisa Mihajlovic could sure wow us with a dead ball.

No, he wasn’t as good technically as those that have come before him on this list, far from it – he was a no-nonsense centre back, FFS – but that’s what makes him so special, and what gives him the Bronze medal here.

It’s like this: you wouldn’t call Alfonso Cuaron the greatest Cinematographer of all time (the GCOAT) just because he won an Oscar this year, because he’s overqualified in other areas, just as Maradona, Messi, Pele, Ronaldinho, Platini, Zidane and more in this list are. That’s why Sinisa gets the nod.

Not because I’m a big racist. Now that we’ve got that chat out of the way, the anointing of Rogerio Ceni as the second greatest free kick taker of all time can go ahead without distraction.

Rogerio Ceni. Quite literally, a man like no other. ?Who else? Seriously, who?

From everywhere you look, it’s indisputable. Juninho Pernambucano is simply the greatest free kick taker of all time. It’s not even a discussion. Is he the top scoring set piece taker in history? Yes, with 77, he is indeed.

Did he do it with the greatest flair? You bet.

Could he do it from anywhere? Are you ?kidding?

That link will send you to his ‘Best Free Kicks Ever’, but, to be honest, that feels discriminatory. Just watch them all. ?Now.