Those are the number of touches for Mauro Icardi in each of his four Champions League appearances so far this season. In all four, he has registered the fewest touches of the ball of any starting player (including the goalkeepers).

And yet, the Inter captain has scored three times in the competition, each securing victory or rescuing a point, as he did against Barcelona at San Siro on Tuesday night. His three touches to control, swivel and fire past Marc-Andre ter Stegen with three minutes remaining constituted over 14% of his time with the ball. 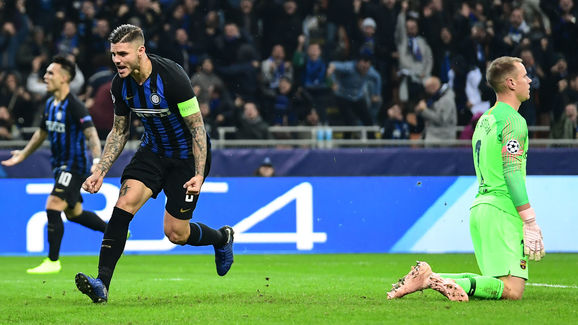 In the Milan derby back in October, where he nodded home a stoppage time winner, his touch tally was again just 16 – 25 fewer than even ?Inter keeper Samir Handanovic.

?Icardi does not support, he does not drop deep, nor does he do many of the other things we are told a modern forward must.

1.8 – In the last Serie A Mauro Icardi scored on average a goal every 1.8 shots on target, the best ratio among players with 10 or more goals. Crucial.

But, as his manager Luciano Spalletti puts it (as quoted by ?Goal): “Icardi inside the penalty area is impossible to stop.

“He is lethal. I would like him to join in more with the team play, but that takes nothing away from his finishing.”

He is the quintessential ‘number nine’, still operating in 2018 like a throwback to a bygone era. Stay up top, wait for chance, hold nerve, score it.

In the same way that Inter’s ultras have seemingly forgiven Icardi his trespasses over early transgressions that might have finished off another player, Inter’s coaches have let him off defensive duties because, simply put, he can do what few can in the penalty area… and with fewer chances.

We often reserve the categorisation of football intelligence for playmakers and technical players who see a lot of the ball, but Icardi’s ingenuity often comes without it, through his

A close up clip lauding Icardi’s movement prior to his Milan derby winner went viral on social media recently. It showed, with the game level in

A fraction of a second later, however, Icardi darts away from the defender with the indifference of a fish evading an overly familiar scuba diver who has come to close. Musacchio slips in the confusion, Icardi has his yard, he heads past Gianluigi Donnarumma. Game over.

Icardi only needs one chance. Best pure striker in the world right now

Trained in Barcelona’s cantera before making his name in Italy, Icardi’s style of play is far removed from the titki-taka commonly associated with his alma mater. Rather than death by a thousand cuts, the Argentine’s game is all about one-hit kills.

No club was willing to take a risk on the divisive young forward back in 2016, after the fallout of his ill-advised autobiography almost saw him kicked out of Inter. However, two years on he is one of the world’s most coveted strikers with a reported release clause of €110m that is almost as good value as Icardi’s own touches to goals rate.

However, while his goalscoring exploits have seen him linked with big money moves to many of Europe’s top clubs from Real Madrid to Chelsea, whether another club would afford him the freedom to be what is that he has at Inter is debatable.

Hopefully whatever happens for Icardi in the future, no-one will try to change him too much.