Christian Eriksen came off the bench to earn Tottenham a crucial win against Inter in the Champions League, keeping their slim hopes of qualification for the knockout stages alive.

Spurs started brightly at Wembley but failed to make their early dominance pay, with Erik Lamela skewing wide and Lucas Moura striking straight at Samir Handanovic when both were well placed, before Harry Winks struck the bar with a long range curler.

Inter showed a little more attacking impetus in the second period but struggled to get Ivan Perisic and Mauro Icardi into the game. Eriksen scored the crucial winner after striking high into the roof of the net from Dele Alli’s lay-off following neat work from Moussa Sissoko.

Tottenham have been underachievers since returning to the Champions League. They were knocked out at the group stage during the 2016/17 season and were dumped out by Juventus last year despite having the upper hand in the last 16 tie.

However, they didn’t panic at any stage against Inter and were duly rewarded for their persistence when Eriksen struck following excellent work from Sissoko.

They now face a massive trip to Camp Nou when they face Barcelona in December, with the La Liga champions likely to rest key players with their progression from the group stage already confirmed.

STAR MAN – On his return to the side, centre back Jan Vertonghen performed exceptionally. Always cool on the ball, the Belgian helped nullify the threats of Icardi and Perisic. 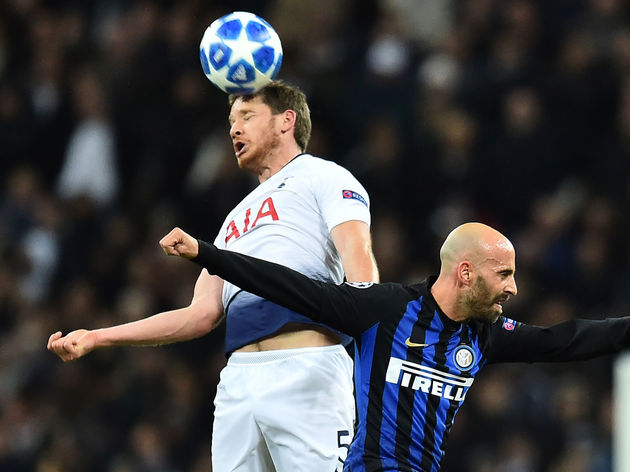 As usual, he brought the best out of compatriot Toby Alderweireld, who was also calm in all his dealings with Inter’s attackers.

WORST PLAYER – There weren’t too many poor performances for Spurs on Wednesday night, but Lucas Moura would have been disappointed following his substitution after failing to make good of a few glimpses of quality.

The Brazilian faces a big couple of weeks, with Son, Alli and Lamela all staking their claims for starting positions over the past month or so with good performances.

Inter have blown hot and cold at times this season but one thing that has never been doubted is the quality of their defenders and in particular their centre backs, Milan Skriniar and Stefan de Vrij. The pair showed enough resilience and guile to ensure their net did not bulge on Wednesday until the 80th minute, when Eriksen finally opened the scoring.

Tottenham essentially gifted Inter their 2-1 win earlier in the campaign with some shoddy defending late in the game but the Lilywhites didn’t help the Italians out a second time as Inter showed a lack of cutting edge and creativity in the final third.

STAR MAN – Skriniar showed why he is so highly thought of in Serie A with a commanding performance and was unfortunate to finish up on the losing side.

He commanded the back line with help from De Vrij and enjoyed a good battle with Harry Kane.

WORST PLAYER – So often the man for the big occasion for Inter, Mauro Icardi was quiet, failing to have a single shot. Inter needed their captain but he was devoid of any opportunities thanks to the lack of any creativity from the visitors’ supporting players.

Tottenham have a north London derby at the Emirates on Sunday to look forward to, with their massive clash at Barcelona coming in December.

Inter are next in action on Sunday when they travel to Roma, before their final group game against PSV at San Siro next month.