The penultimate week of the Premier League transfer window has been a bit of a doozy as far as outlandish transfer rumours are concerned.

We’ve heard tales of swap deals that make about as much sense as Steve Bruce getting the Newcastle job and transfer fees that would even bring a shudder to Jeff Bezos’ accountant, and with just seven days now remaining for the top English clubs to throw their financial weight around, things are only going to heat up from here.

With all this in mind, we’ve bravely undertaken the arduous task of rounding up the most insane rumours that have come to light over the last seven days, and assessed them so you don’t have to. Ignoring the fact he’s a former Champions League winner and one of the most influential players on the planet on his day, and the fact that he probably earns enough to be ?Everton’s highest earner twice over, ?speculation that has arisen linking Barcelona’s Ivan Rakitic with a move to the Premier League side still makes no sense.

He is quoted as saying he has ?no plans to leave Barca this summer, and is quite content to fight for his place and run down the remaining two years of his contract. Would the lure of, with all due respect, a presently-middling Premier League side be enough to inspire a U-turn on that one? It does not seem likely.

He may leave, but as one of Europe’s elite midfielders still with a year or two left at the peak of his powers, it seems almost certain to be to a club playing European football this season. Just in case your summer residence is under a rock, the big story relating to Paulo Dybala is that ?Juventus, for some reason not one single person can reasonably explain, want to swap him for Romelu Lukaku. This would in itself normally be enough to qualify for this list, but given the weight carried by reports on it, it seems for all the world as if it’s actually in the works.

According to some headlines, however, including but not exclusive to ?this one by ?Football365, the deal is now in jeopardy due to Spurs considering an offer to rock the boat and hijack the deal for their benefit.

This one has been contorted out of recognition, to be fair, and really just stems from suggestions that Tottenham are keeping tabs on the situation, and that Dybala isn’t keen on joining a club with no guarantee of Champions League football in the long-term. But let’s not pretend there’s a realistic chance of it happening, especially when the slightly less good English version of Dybala is already on Spurs’ books. Sticking with ?Manchester United, their pursuit of a new central defender hasn’t been so much of a poorly kept secret as it has been public record, with Harry Maguire subject to multiple bids – each of which have so far been knocked back.

It seems highly likely that they will nonetheless persevere, but will have other irons in the fire just in case. One such contingency plan, according to the ?Guardian and a few other places, is Barcelona’s Samuel Umtiti.

From United’s perspective, however, it looks unlikely, since they need a dependable centre-back who will be able to play more or less every game and have a Virgil van Dijk-esque impact on their defence. Umtiti has the ability for the task, but his injury record means ‘gamble’ would be putting it mildly.

Then there’s Barca’s end of the bargain to consider. Umtiti is one of three established centre-backs, with Gerard Pique and Clement Lenglet the others, in the squad at present. Umtiti’s sale looked likely when Matthijs de Ligt was inbound, but now that deal is dead, it’s difficult to see them signing off on his departure for anything other than a huge fee. 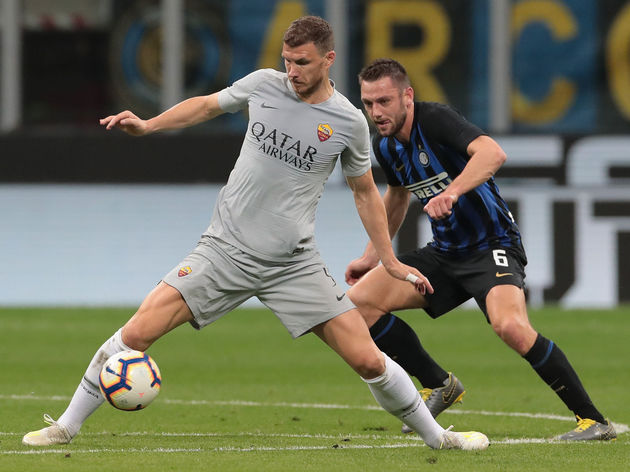 This one actually seems to have some genuine basis, believe it or not, but the chances of it  going through seem ambitious at best.

In summary, Inter can’t even pay anyone to take Mauro Icardi off their hands at this stage, so ?reports in Italy say they have switched tactics, and will now consider a swap deal for long-term target Edin Dzeko – so long as Roma throw a sweetener or two into the bargain.

It would have to be a hell of a sweetener, however, seeing as Icardi, despite all of the melodrama that comes with him, is one of the best strikers in the world. Dzeko, meanwhile, is an ageing target-man with maybe a year left at the peak of his powers. This, in addition to all the moving parts that would have to fall into place for the deal to come off, mean it’s all a bit pie in the sky. On top of this, Unai Emery has said he plans to add one more signing, and that it’s a defender; which squares with what Arsenal’s squad needs; especially if Laurent Koscielny takes off as expected.

Would it make sense, then, for them to spend the rest of their budget on a 32-year-old midfielder who would likely be one of their top earners without improving the side long-term? Not in the slightest.

Oh, but he was at the Emirates Cup. I take it all back. Right, rumours. That’s enough out of you.

Yeah you’ve read this correctly.Joe Hart, the Burnley keeper of England and Manchester City fame, is being lined up as a replacement for Iker Casillas at Porto.

Other than the fact that the 32-year-old is no longer anything close to a Champions League standard keeper, there is no shortage of reasons this seems like a questionable one. His likely wage demands far outweigh his ability, and there is a chance he may now be needed at Burnley after Tom Heaton’s departure.

For your consideration, this is a story created by the Daily Star and relayed by the ?Sun. Will let you make your own assumptions from that.