Having re-emerged as a potential power in the late 1970s, even beating hosts and winners Argentina during the 1978 World Cup, Italy had entered the 1982 tournament off the back of huge domestic shame. The Totonero match fixing scandal resulted in sanctions for as many seven clubs, five in Serie A, with AC Milan and Lazio both relegated for their part.

Officials and players were also swept up in the punishments, including national team striker Paolo Rossi. He was slapped with a three-year ban, and it was only his suspension being cut by 12 months that allowed him to play in the 1982 World Cup in Spain.

In what should have been a fairly straightforward group stage against Poland, a debuting Cameroon and an ageing Peru, Italy drew all three of their first round games. It was enough to progress to the second round, but only by virtue of having scored two goals to Cameroon’s one.

Brazil, on the other hand, were revered. Zico and Socrates were among the best players in the world and the Selecao squad was filled with supreme talent – Eder, Junior, Falcao, Toninho Cerezo, Serginho… “The Brazilian side of 1982 played the game beautifully, but there was something ethereal about them,” Andreas Campomar notes in Golazo! A History of South American Football.

Hoping to replicate the generations of Pele, Garrincha and Jairzinho, Brazil had cruised through their group, narrowly beating the Soviet Union before thrashing Scotland and New Zealand. Only Hungary scored more than Brazil’s 10 goals in the opening round, but their inflated tally of 12 had been the result of a 10-1 victory over El Salvador, still the World Cup’s biggest ever win.

Socrates, who was a qualified physician and later practised medicine after his retirement, was the captain and brightest star. “He could do what he wanted with the ball thanks to his enormous skill and vision,” Johan Cruyff remarked about the great man in a foreword for Andrew Downie’s book, ‘Doctor Socrates’. “It’s funny that he called me the orchestra conductor because that is exactly how I saw him.”

Italy and Brazil wound up in Group C of the second round, alongside holders Argentina. Gli Azzurri won their first game of the tournament when they faced the champions in Barcelona, thanks in no small part of Claudio Gentile’s infamous treatment of Diego Maradona. They prevailed 2-1, while Brazil beat Argentina 3-1 a few days later, meaning that the subsequent game between Italy and Brazil would decide which of the two made it through to the semi finals. But because of the latter’s superior goal difference, a draw would be enough for them, whereas Italy needed to win.

Just as the group’s other game had been, the fixture was played at the Sarria Stadium in Barcelona, home to Espanyol until it was bulldozed in 1997.

“Nobody gave Italy much of a chance in the World Cup group match against Brazil played in the sweltering heat of Barcelona,” writes author John Foot in ‘Calcio: A History of Italian Football’.

This was a huge mismatch. Italy had scraped through the first round and employed dirty tactics to get the better of Argentina, while Brazil were simply magical and surely destined for glory.

And yet, it took just five minutes for Italy to take the lead on that famous day. Rossi headed in a back-post cross from Antonio Cabrini to score not only his first goal of the tournament, but his first international goal since 1979. He had been decidedly poor in the first round games, but both he and Italy were building momentum as the World Cup progressed.

Gentile, just as he been with Maradona in the previous game, was tasked with silencing the brilliant Zico in the hope of stifling Brazil’s creativity. But when Zico beat his marker with a quick turn and played in Socrates just seven minutes after Rossi’s opener, the Selecao were level.

Barely any later, Rossi restored Italy’s lead. This time, he capitalised on a sloppy pass across the field by Cerezo, racing through on goal before taking an early shot from the edge of the penalty area.

Cerezo had been at fault for Italy’s second goal and the Atletico Mineiro midfielder shared some of the blame for the third after a poorly directed header back towards goalkeeper Waldir Peres handed Italy a corner in the 74th minute, their first of the match. As the ball was swung across, it dropped to Marco Tardelli, whose shot from the was turned in by Rossi in the six-yard box. 3-2.

In the closing stages, Italy thought they had gone 4-2 up, only to see the offside flag raised when Giancarlo Antognoni put the ball in the net after a counter attack. Brazil then had one more big chance when a header from defender Oscar was gratefully grasped by Zoff on the goal line.

Israeli referee Abraham Klein soon blew the final whistle. Against the odds, Italy had won and, more importantly, were through to the last four of the World Cup.

“Paolo Rossi’s hat-trick knocked Brazil out and made a nation despair. No wonder Rossi’s autobiography is called ‘I Made Brazil Cry’,” Foot, who also described Brazil as being ‘arrogant’ and ‘careless’ in their approach to the game, noted. “Italy didn’t make a single mistake.”

“Brazil’s generation were crushed by the loss. Zico, Cerezo, Leandro, Junior, Serginho, they were more than just team mates, they were the best of friends,” said Socrates biographer Downie. The Brazilian team had even agreed to give up drinking and smoking in the lead up to the tournament to give themselves the best chance and were reduced to making up for lost time as they drowned their sorrows on an ‘all-nighter’ led by Socrates mere hours after the defeat, continuing the next day.

With Brazil on their way home, Italy went on to beat Poland 2-0 in the semi final, still in Barcelona but now at Camp Nou. Rossi, now on fire after a slow start to the tournament, scored both goals. They then met West Germany in the final in Madrid’s Santiago Bernabeu, emerging victorious after goals from Rossi, Tardelli, whose emotional wide-eyed celebration is the lasting image of that World Cup, and Alessandro Altobelli rendered Paul Breitner’s late goal for the Germans consolatory. 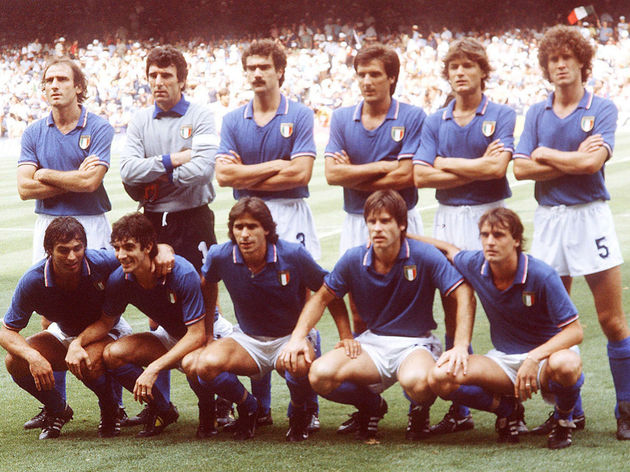 It was one of the single best games the World Cup has ever seen, but Italy’s win over Brazil had a much deeper impact as well because it changed something in world football. The free flowing attacking style played and perfected by the likes of Hungary’s Magical Magyars in the 1950s, Pele’s Brazil in the 1960s and Johan Cruyff’s Netherlands in the 1970s was over, replaced by a more cautious style, an Italian style, that would come to define the next 20 years.

As Cruyff went on to say in his eulogy-like foreword for ‘Doctor Socrates’, “It was a huge disappointment for the whole of football because after that World Cup teams started to play like Italy did. No one knows what would have happened had Brazil triumphed.”

But try telling Italy it was a tragedy…